Thales, G+D and IDEMIA continue to lead this segment with a combined 80% share

The rising adoption of eSIM technology by OEMs across smartphones, smartwatches, automotive and other IoT devices has driven the need for MNOs and MVNOs to offer remote provisioning services by deploying secure eSIM management platforms and servers.

Globally, there are more than 15 GSMA accredited eSIM management platform suppliers. Thales leads this segment, capturing 40% of the platform deployments by the end of Q1 2021. Thales has been leading the market since 2018, followed by Giesecke+Devrient and IDEMIA.

Commenting on the market dynamics, Vice-president of Research Neil Shah said, “The dominance of Thales, G+D and IDEMIA in this segment can be attributed to multiple factors. These companies have been supplying hundreds of millions of traditional SIM cards per year for decades and have strong relationships with the global MNOs/MVNOs. They further drove the eSIM evolution by contributing within the standard bodies such as GSMA and 3GPP to help develop and standardize the eSIM technology right from enablement to management. This has given these companies an early mover advantage to capture the lion’s share of the market.

While Thales, G+D and IDEMIA have raced ahead tapping the early adopters, the next growth wave for eSIM management deployments will come from adoption across hundreds of Tier-2 and long-tail mobile operators for consumer, roaming and IoT applications. This is where new entrants such as 1OT Tech, Truphone, Kigen, Workz, Ericsson and Netlync are poised to capture significant growth in coming years. These companies have either developed their own management platform or are partnering with the bigger players to resell and bundle with other solutions and services such as Entitlement Servers, rapid BSS/OSS integration, more intuitive GUI and other provisioning tools.” 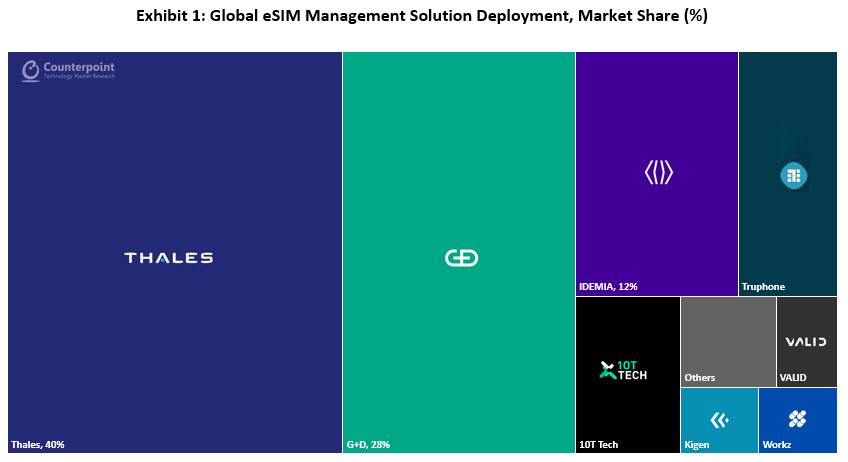 Commenting on the future outlook, Research Analyst Ankit Malhotra said, “The requirement of eSIM management platforms is poised to grow in the coming years with over 6 billion eSIM capable devices expected to be cumulatively shipped over the next five years. In the coming quarters, we will see high demand for eSIM management platforms led by growing shipments of eSIM supported consumer devices such as smartphones and smartwatches.”

Malhotra added, “Around 20% of the smartphones sold in Q1 2021 were eSIM capable, led by Apple. Similarly, close to 14% of the smartwatches shipped in Q1 2021 were eSIM capable. The eSIM penetration in the IoT market is growing steadily as well. The market will also see a push from the eSIM-based roaming segment, which is expected to pick up in the second half of 2021 with the lifting of travel restrictions.”

Motel 6 to Offer Samsung Galaxy Smartphones to New My6 Members

Truphone sold for £1 to Hakan Koç and Pyrros Koussios

eSIM, a solution full of benefits