Canada telecom prices are some of the highest prices for mobile phones services compared to those living in the other G7 nations and Australia.

Canadian services claimed the second- or third-highest price for the five other higher-service options studied, like unlimited talk and text with five GB of data. 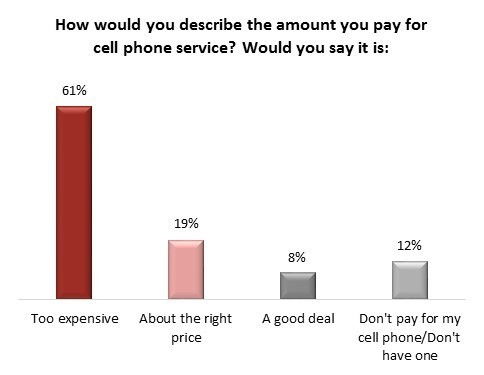 Sixty-one per cent of respondents in an Angus Reid poll earlier this year said their wireless bills were too high, while 19 per cent said it’s “about the right price,” and only 8 per cent felt they had “a good deal.” Chart: Angus Reid Institute)

But OpenMedia, one of the consumer groups that had objected to the carriers’ proposals earlier this year, says the CRTC’s new position “completely fails” to meet the needs of low-income people in Canada.

The CRTC had ordered Bell, Rogers and Telus in March to come up with data-only plans to fill a void in the marketplace. But it acknowledged Monday that there was widespread criticism from individual consumers and consumer-advocacy groups about the price of the initial proposals filed in April.

The CRTC now says all three national wireless carriers will offer at least one plan that charges $30 per month or less for one gigabyte (1,000 megabytes) of data.

Telus will offer two $30 per month plans with 1 GB of data through Koodo and Public Mobile, while Rogers will offer a similar 1 GB plan for $30 through Fido, and Bell’s Virgin Mobile will offer the same amount of data for $28 per month, according to the CRTC.

It listed only Bell Canada’s Lucky Mobile and the Rogers Fido and Chatr brands with $15 data-only plans with 250MB of data, but Telus had previously noted it had a Public Mobile plan for as low as $20 per month for 250MB of data.

Bains called the new plans “a step in the right direction” but added more must be done to make prices more affordable.

“Connectivity is not a luxury in today’s digital age. And greater affordability for Canadians will come from more competition,” he said in a statement. “As such, our government will continue to monitor market dynamics and promote greater competition in the telecom sector to make sure all Canadians can benefit from quality services at a better price.”

The decision Monday followed the minister’s instruction for the CRTC to reconsider a decision that at least temporarily blocked the widespread introduction of mobile virtual network operators that could piggyback their services on networks owned by other companies, known as facilities-based carriers.

Instead of accepting widespread use of MVNOs, the CRTC opted to continue its preference for facilities-based carriers and addressed the affordability issue by ordering the national carriers to offer low-cost, data-only plans. It also committed to initiating a broader review of the industry by March.

In announcing its decision on Monday, the CRTC repeated its commitment to a broader review of the wireless industry.

“While the new lower-cost data-only plans represent a step in the right direction and provide more choice for Canadians, we remain concerned by the overall condition of the market. To this end, the review we will launch next year will look at the state of mobile wireless competition more broadly,” CRTC chairman Ian Scott said in a statement.

The regulator said it will monitor the implementation and availability of plans by Bell Mobility, Rogers and Telus over the coming months to ensure that the national wireless providers honour their commitments.

“Further, the commission expects that the lower-cost data-only plans will be available at least until a decision is issued with respect to the review of mobile wireless services. The withdrawal of any of these plans prior to the conclusion of that review may inform the commission’s views on appropriate regulatory measures resulting from that proceeding.”