Xiaomi beat Samsung in Europe for the first time

Xiaomi overtook its South Korean counterpart, Samsung, to rank first in the number of phone shipments in Europe, after it shipped 12.7 million phones in the second quarter of 2021, an increase of 67.1 percent year on year, according to new figures from the market research company, Strategy Analytics.

“Xiaomi has achieved great success in Russia, Ukraine, Spain and Italy among other countries, and has found enthusiastic customers for its feature-rich and value-rich Mi and Redmi smartphone series,” said the company’s assistant director, Boris Mitodiev, through a press release. 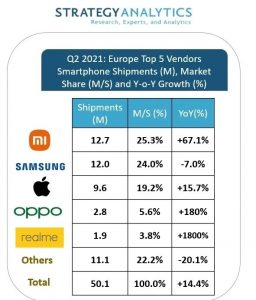 On the other hand, according to Strategy Analytics data, “Samsung’s shipments” fell 7 times in the same period to 12 million units, despite the fact that the Korean company is still the largest seller of phones in the world.

Sixt to launch robotaxis in Munich with Intel partnership…

In their report, Strategy Analytics researchers confirmed that the total shipments of smartphones in Europe in 2021 witnessed an increase thanks to the recovery after (Covid-19), noting that the US company, Apple showed a good growth of 15.7 percent, thanks to its customers’ interest in the latest developments, in iPhone 12.

And the Chinese company, Xiaomi quarter in phone shipments in Europe, is its second victory in 2021, after it was announced on July 16 that it had surpassed Apple for the first time, and replaced it in second place in the smart phone sales market during the second quarter of the current year.

These might just be numbers, but it reflects a significant change in market trends, at least in Europe. Consumers are gravitating away from the likes of Samsung and Apple to get their smartphone fix, especially with new affordable 5G devices. More importantly, brands like Xiaomi and OPPO are starting to be seen in a more favorable light in recent years, providing enough threat to longtime market leaders in different regions of the world.

Sharing is caring so..
EuropeSamsungXiaomi

New WhatsApp ‘View Ones’ feature deletes photos after they are opened

Sixt to launch robotaxis in Munich with Intel partnership next year