The regulator wants to protect customers from excessive bills

The move aims to “protect subscribers” from “high charges”, the regulator said on Friday, because the service previously activated automatically when a user inserted a “SIM card in the mobile device, causing increase of charges and loss of balance”.

Hamad Al Mansoori, TRA director general, said the regulator’s decision reflects its “keenness to achieve customers’ happiness by implementing the best international standards on the services provided by the licensees in the country, providing the best services and the highest quality, and giving the subscribers more freedom and flexibility in choosing the services they desire”.

Data-on-demand is offered by Etisalat and du, allowing subscribers to dial a number to access mobile data and pay by the minute. However, some consumers faced hefty bills after forgetting to unsubscribe from the service, which remained active until they put a stop to it or ran out of credit. The TRA first issued an order to discontinue the service on Twitter, before following up with a statement on Friday.

Who Can Still Enter Dubai With a Visa On Arrival? 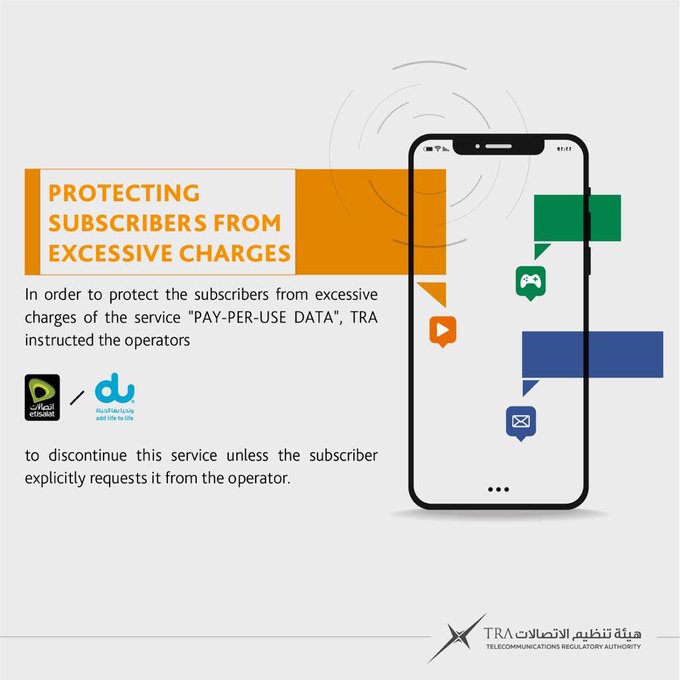 On Thursday Etisalat sent a text message to its subscribers saying: “Great news! No more bill shocks on data! To prevent unexpected charges, pay-as-you-go data has been blocked from 1st July 2019. For on-demand mobile internet, please dial *800# and use Play on Demand for only 5 fils/min.”

According to Etisalat websites on Saturday, customers now wanting Start/Stop data services must subscribe and are charged 30 fils for the first 15 minutes and then 2 fils per minute.

Du lists the same rate on its website with both operators now capping the length of time the service remains active.

While du states that the service remains active “for a maximum duration of 4 hours in one session”, Etisalat says customers are “protected from Pay-as-You-Go charges for two hours after stopping your data session”.

Huawei opens in Madrid its largest flagship store outside China

Get the best international SIM Card