The leader in 5G with America’s largest 5G network now takes the speed crown in multiple third-party reports, too

“Last year we blanketed the country in 5G, and now we’re layering on the capacity and speed. We closed out 2020 with over 100 million people covered with our Ultra Capacity 5G and we will extend this deployment nationwide by the end of 2021,” Neville Ray, president of Technology at T-Mobile, said. 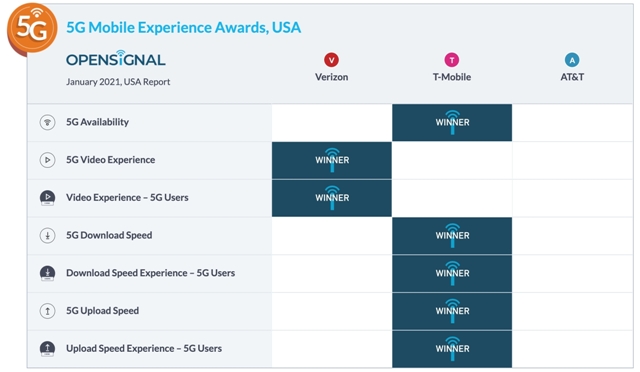 Opensignal’s reports and insights are based on measurements of real experience. Its approach relies solely upon billions of device measurements shared by millions of real users every day – recorded in all the places where people actually live, work and travel.

Recent tests by umlaut in Chicago, Houston, New York City and Washington, D.C. found T-Mobile had the fastest average 5G download and upload speeds. Average download speeds for T-Mobile’s Ultra Capacity 5G clocked in at 218 Mbps across the four cities and reached a blazing 315 Mbps in Washington, D.C. As

“T-Mobile from the beginning has taken a differentiated strategic approach to 5G, first building a low-band foundation with broad coverage, and then adding a layer of deep capacity and speed with mid-band 5G,” said Anshel Sag, senior analyst with Moor Insights and Strategy.

“We are now starting to see the results pay off in the two areas customers care about most – coverage and speed. At the current pace T-Mobile is building out these two crucial 5G bands, we expect its lead will continue into the foreseeable future.”

Only a 5G phone lets you experience the benefits of America’s largest 5G network. And at T-Mobile, 5G access is included in T-mobile plans at no extra cost.

Sharing is caring so..
5GT-mobileUSA

Looking for best home security system? This is the one.

5G Is Driving Economic Growth, Resiliency And Sustainability In A Post-Covid Economy

EU to introduce Digital Vaccine Certificates in a Bid to…

How to activate Airtel eSIM for Smartphone

Smart City App: German city’s services from A to Z

My eSIM: the iPhone app is available on the App Store

Travelling to Dubaiby Christina4 months ago

What is the best eSIM for travel …by Aral4 months ago

Wirex Partners with Zero Hash Ahead of US Launch