Realme was the fastest-growing brand in Q3 as it grew 132% QoQ to reach 14.8 million units for the quarter. With this, it became the world’s fastest brand to ship 50 million smartphone units since inception * Global 5G smartphone shipments in Q3 exceeded the cumulative shipments of H1 2020

The global smartphone market declined 4% YoY but grew 32% QoQ to reach 366 million units in Q3 2020, according to the latest research from Counterpoint’s Market Monitor Service. This recovery was driven by all key markets, like the US, India and Latin America, returning slowly to normal due to eased lockdown conditions. The smartphone market has shown resilience to the ill effects of COVID-19 both from the supply and demand side. More about smartphone market global share below.

Commenting on the overall market dynamics, Associate Director Tarun Pathaksaid, “Eased lockdown conditions in all key markets made way for exports and imports, thus streamlining the supply chain again. Also, the pent-up demand due to lockdowns helped the smartphone market take a recovery trajectory. The supply issues are getting resolved as the manufacturing units in China and Vietnam have started operating at their normal levels, while in India, they are operating at 80% of the pre-COVID levels. In markets like the US and Europe, a modest ‘back to school’ bump in the quarter helped the market to recover.” 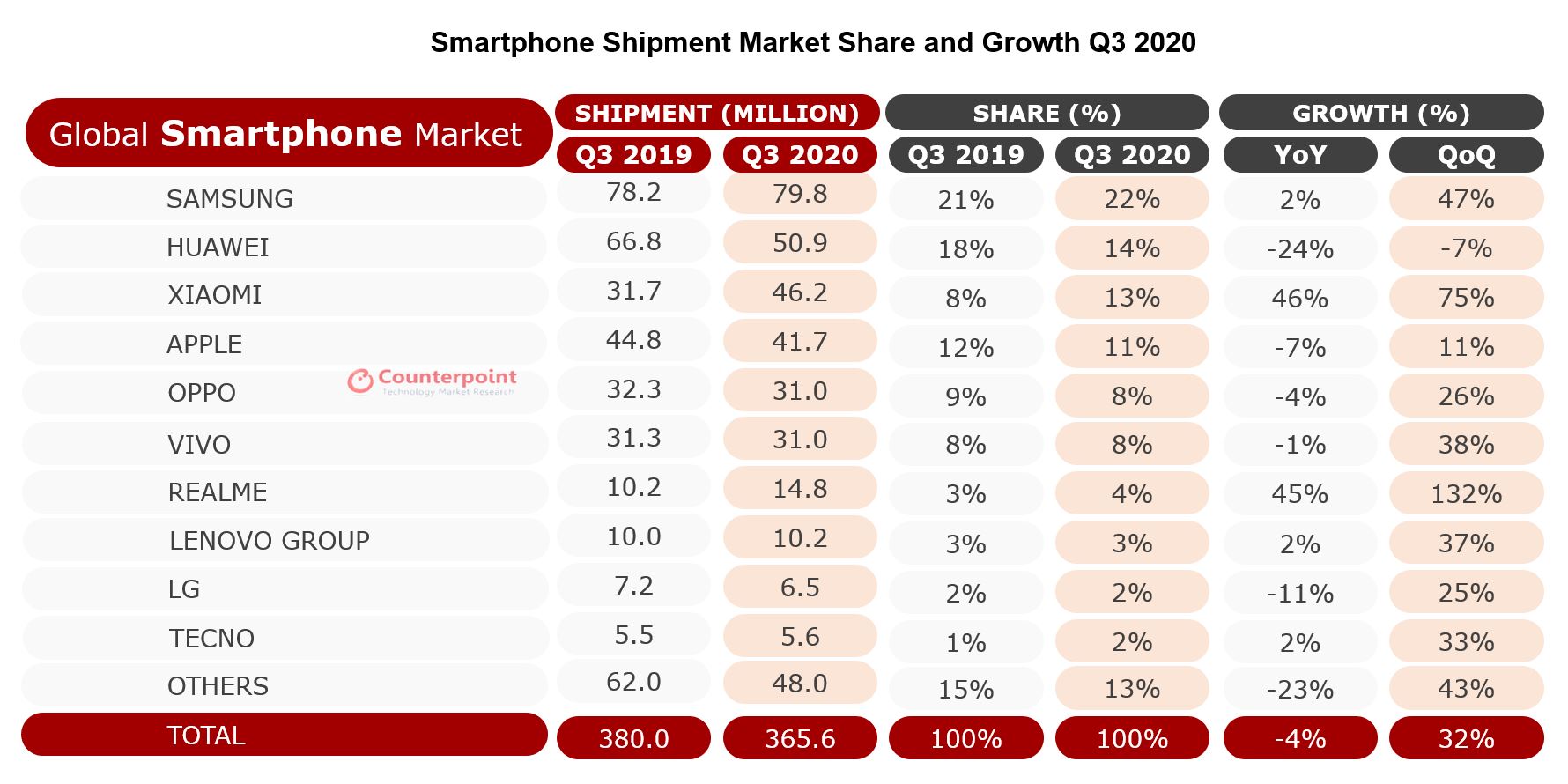 Samsung regained the top spot, shipping 79.8 million units to register 47% QoQ and 2% YoY growth. This is the highest ever shipment by Samsung in the last three years. The company managed to recover in markets including India, Western Europe and LATAM, driven by new models like the Note 20 and from the A-series. A-series 5G SKUs showed solid uptake in the US. In India, Samsung surpassed Xiaomi to become the No. 1 player, driven by the success of the M Series. Huawei was the runner-up in the global market but showed a declining trend as its share dropped from 20% in Q2 2020 to 14% in Q3 2020. Rapid growth of realme continued during the quarter. It grew 132% QoQ in shipments volume, representing the strongest growth momentum among major global OEMs. smartphone market global share

Gigaset GX6 – Smartphone made in Germany

Xiaomi grew 75% QoQ to grab 13% share for the quarter. Notably, this was also the first time when Xiaomi surpassed Apple to capture the third spot. Research Analyst Abhilash Kumar said, “Xiaomi reached its highest-ever shipments at 46.2 million units in Q3 2020. In China, Xiaomi’s struggle for growth ended and shipments were up 28% YoY and 35% QoQ. This impressive show by Xiaomi in China was driven by a series of campaigns and promotions during the brand’s decennial celebrations in August. Also, in new markets like LATAM, Europe and the MEA, Xiaomi’s share expanded rapidly at the expense of Huawei amid US-China trade sanctions. The brand is also performing well in Southeast Asian markets like Indonesia, Philippines and Vietnam.” 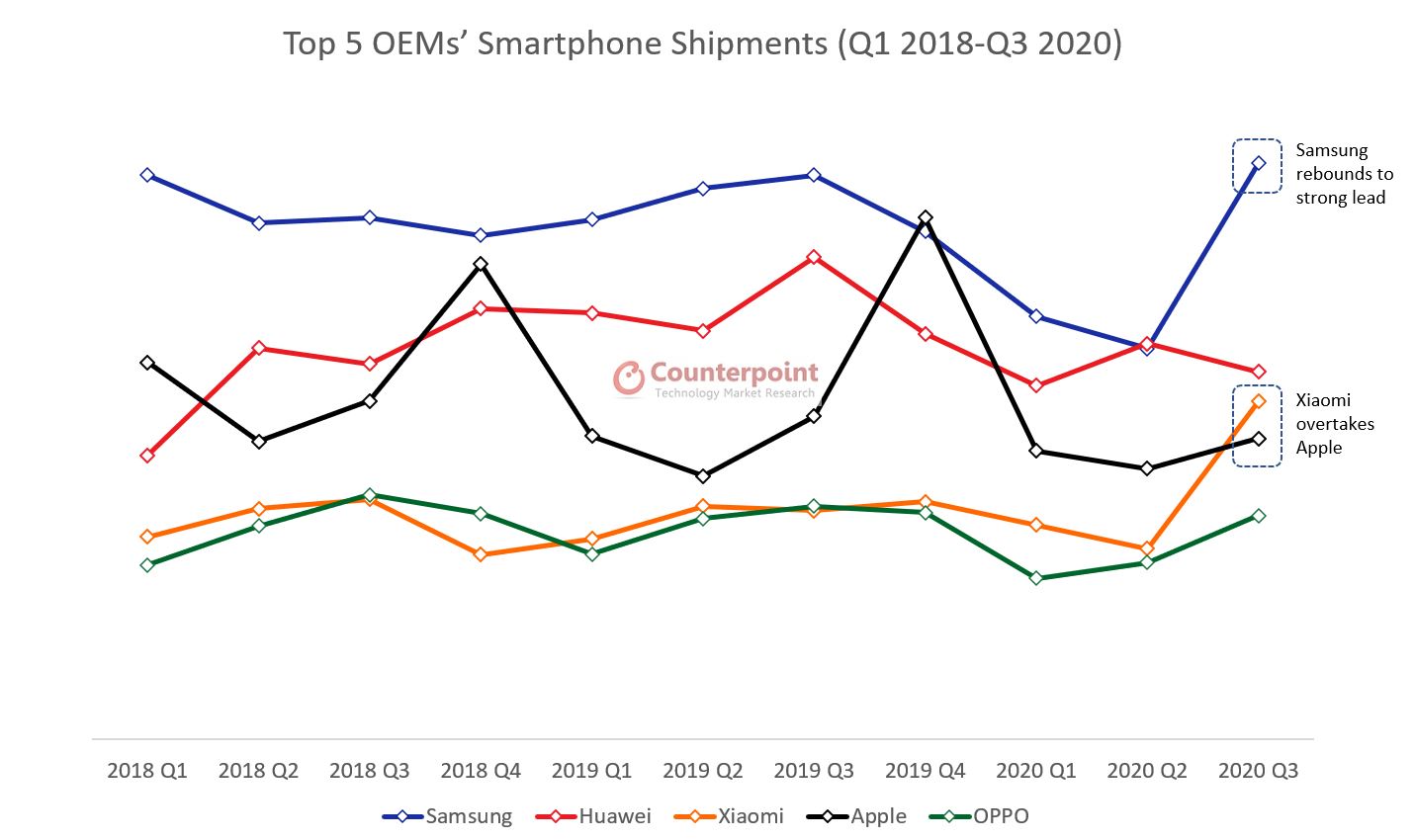 Commenting on realme’s performance, Kumar said, “Accumulative shipments of realme smartphones reached over 50 million units in Q3; with this, it became the world’s fastest brand to hit 50 million shipments since inception, surpassing top players such as Samsung, Apple, Huawei and Xiaomi. In Q3, realme grew to become one of the top 5, or even top 3, brands in its key markets, including India, Indonesia, Bangladesh, Philippines and some other Southeast Asian countries. Having released a strong 5G smartphone portfolio during Q3, realme also achieved a remarkable growth in the China market (90% QoQ in terms of sales volume). With its efforts to bring the affordable yet premium-like products to consumers, as well as its ability to offer smooth digital shopping and after-sales services in different countries, realme has emerged as the most resilient brand during and after the pandemic crisis. Additionally, we see realme’s expansion beyond smartphones into the IoT space. Products like smartwatches, TWS and smart TVs will further help the brand strengthen its position in the global market.” 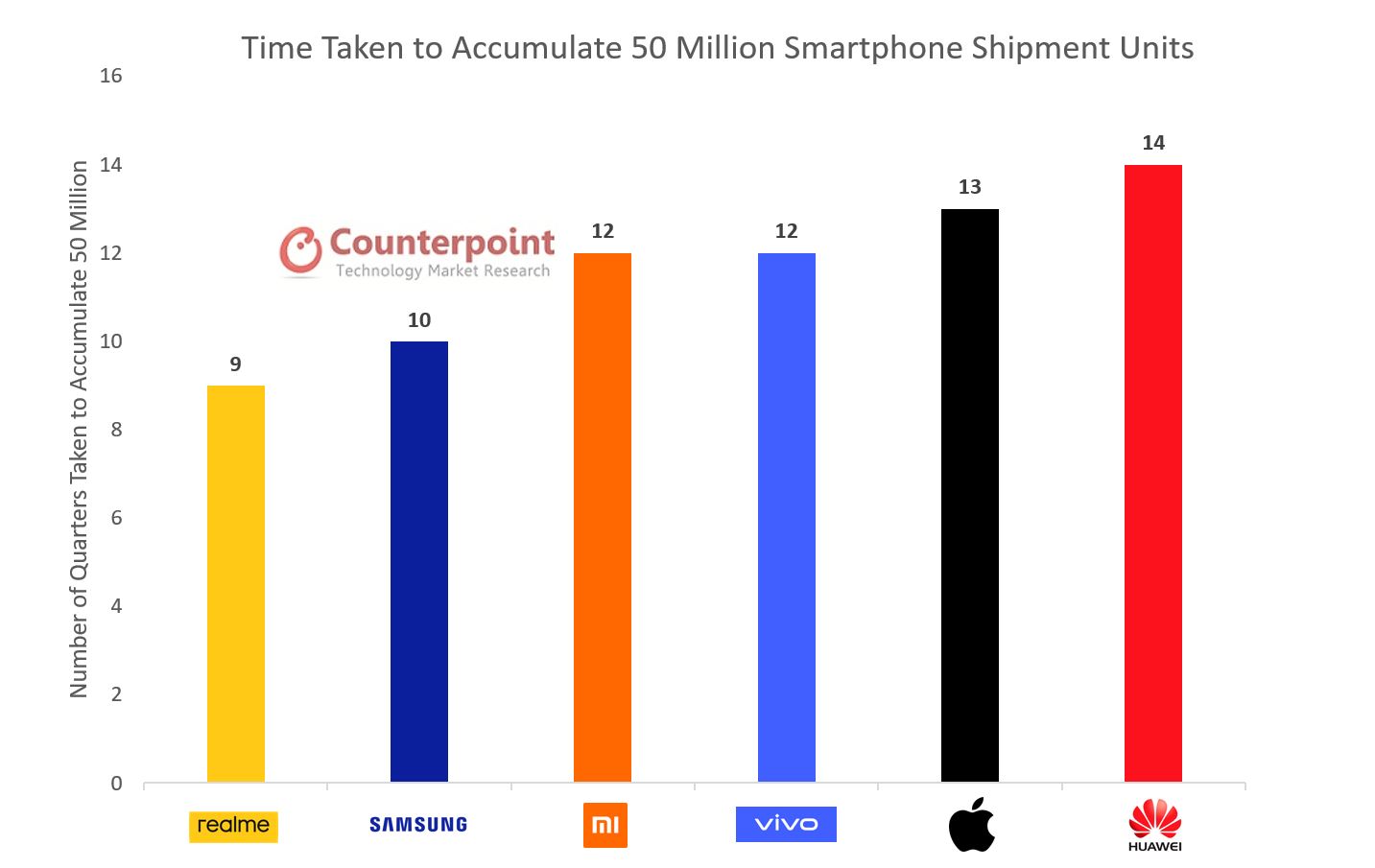 Talking about the 5G share, Research Analyst Aman Chaudhary said, “5G shipments continued to grow (82% QoQ). Interestingly, 5G shipments in Q3 exceeded the overall H1 2020 shipments. The growth was driven by 5G devices quickly proliferating into the sub-$300 price band, with offerings from Huawei, vivo, OPPO, Xiaomi and OnePlus. Affordable 5G devices will drive this segment, especially in China, in the coming quarters. Also, with the launch of the iPhone 12 series in Q4, Apple will be the key to driving 5G volumes in markets like the US, Canada and Western Europe.”

Santa will be working remotely this holiday season

Gigaset GX6 – Smartphone made in Germany

The legend of laptops will return as a smartphone: Meet Motorola ThinkPhone