Roaming out: In the third quarter of 2017, nearly four times as many GB of data volume were consumed in EU countries as a year ago. However, the providers do not have reason to cheer

With the alignment of EU roaming tariffs to national prices as of 15 June 2017, roaming increased dramatically. “In the third quarter of 2016, there were still 407,990 GB of data, but in the same quarter of 2017 already 1.989 million GB, which were consumed in other EU countries, which corresponds to an increase of 388 percent,” the Austrian regulator RTR predicted. 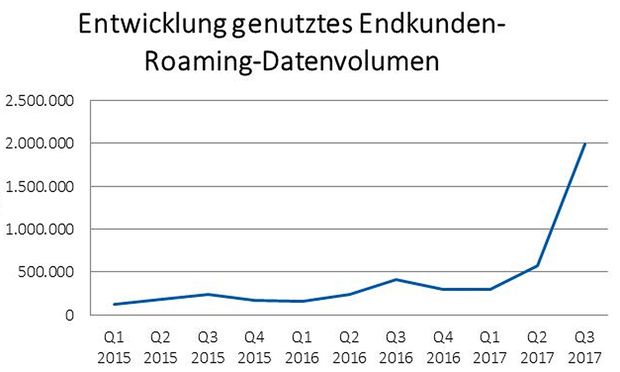 The trend of increased use is also apparent in the minutes. From the third quarter of 2016 to the third quarter of 2017, active roaming minutes increased from 88 million minutes to 139.5 million minutes, or about 58 percent. Passively, they rose from 66.5 to 79.3 million – 19 percent. There was only a slight decrease in roaming SMS, the RTR attributed to the increased use of messenger services such as WhatsApp.

The biggest beneficiaries of the EU Roaming Regulation are – at first glance – the virtual network operators, ie providers that do not have their own network, but hire, such as HOT. They saw an increase in data roaming of nearly two and a half thousand percent.

Nevertheless, there is no reason for the providers to cheer. “In data roaming, for example, end-user revenues for Austrian operators fell from just under 10 million euros in the third quarter of 2016 to around 260,000 euros in the first quarter of 2017. This is around 97 percent less,” the regulator said in a press release.

Where the providers with their own network (A1, T-Mobile and “3”) or their discount subsidiaries could at least benefit from the roaming of tourists in Austria, which was not possible for the virtual operators, since they just do not have a network over which they roam could charge. “They have to come to terms with the disadvantage of high payouts and falling sales,” said the RTR. (Source)