Xiaomi to Rise to No.1 in Spain and Russia Smartphone Market

Global smartphone shipments grew solidly by 11% YoY in Q2 2021, bouncing back from the worst Covid-19 disaster one year earlier, despite chipset shortages and production disruptions. Samsung and Apple became no.1 smartphone vendor in 6 countries each while Xiaomi became no. 1 vendor in three countries, India, Spain and Russia. xiaomi market

According latest research by Strategy Analytics, Xiaomi has become the leading smartphone OEM, by shipment, in Q2 2021 in Russia and Spain, ahead of bigger names such as Samsung and Apple.

So far, Xiaomi has remained the top smartphone vendor in India for a couple of years, but Q2 2021 has marked the first quarter for this Chinese OEM to become the leader by smartphone volume in those two major European countries.

Commenting a few noteworthy trends regarding the Spanish smartphone market in Q2 2021 vs Q2 2020,

– Xiaomi surpassed Samsung, a long time leader.
– Oppo is strengthening its presence, neck and neck with Apple.
– Realme, relatively a new entrant to this market, is taking small, but meaningful share.
– Huawei has collapsed, as expected xiaomi market 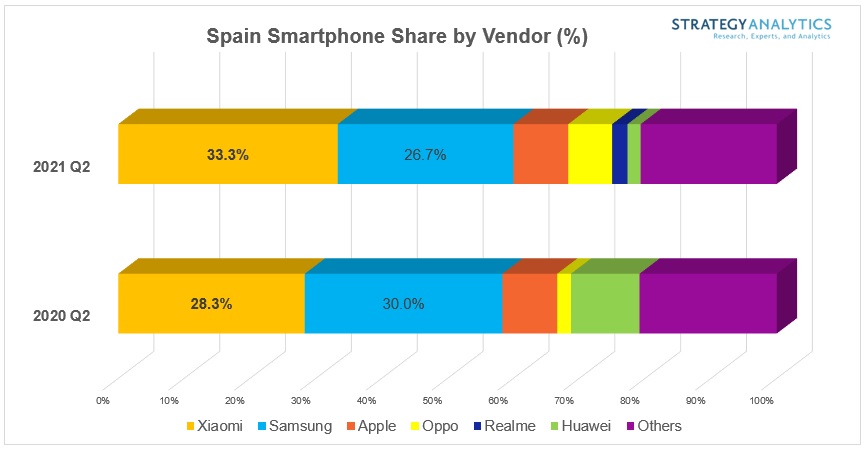 Mobility-as-a-Service Subscriber Revenue to Increase 900% by…

In the last quarter, the fourth quarter of 2020, Xiaomi’s mobile phone market share entered third place in the world. This is the first time during the last six years. Later, Xiaomi returned to this position. What supports Xiaomi’s return to third place in the world is its achievements in overseas markets, especially the European market. Europe represents the high-end mobile phone market in the world. In recent years, Xiaomi has been conquering the high-end market, and its average selling price overseas has been increasing.

According to an analysis by Russian retailer MTS, in June this year, Xiaomi’s share was 31.2%, and Samsung’s share was 29.8%. Apple is in the third position with a market share of 14.5%.

Another Chinese manufacturer, Realme is in the fourth position with a market share of 4.6%. Xiaomi’s sub-brand, Poco, is fifth with a share of 3.8%. At the same time, in terms of sales, Apple still maintains its leading position, said the report.

The strategy of Xiaomi is simple – it is focused on bringing cheap and affordable devices to market, says the report. The popular Poco brand in Russia also adopts this strategy. “Poco is focused on offering flagship features at midrange prices,” it said.

Sharing is caring so..
AppleIndiaRussiaSamsungSpainXiaomi

Amazon will give you $10 if you pay by palm

Mobility-as-a-Service Subscriber Revenue to Increase 900% by 2027

Collaboration and communications tech to continue to thrive with hybrid working

Wego Collaborates with Azerbaijan Tourism Board to Provide A…

Airlines Can Monetize Inflight Connectivity with…

Kingdom of Bhutan in Eastern Himalayas to get Ericsson 5G…

Skyscanner Reveals Surge In Interest For US Trips Following…

US to Ease Travel Restrictions for All Vaccinated Travelers…