Wi-Fi connection will become free in all public transportation services and parks across Seoul from next year, the city government of Seoul on Tuesday.

The Seoul Metropolitan Government said in-vehicle Wi-Fi terminals will be installed initially in 1,499 town shuttles serving 235 routes by the end of this October as part of efforts to improve information accessibility and reduce telecom costs. It will equip 6,000 city buses by December and 1,405 intercity buses by next year. Free Wi-Fi connection is currently available in 270 buses in Seoul, which account for 3.6 percent of the total. 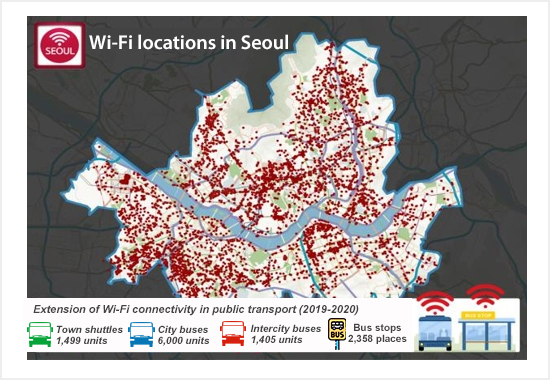 [Source by the Seoul Metropolitan Government]

The city will also expand the service to bus stops with terminal installations in 358 central bus-only lane stops this year and in 2,000 roadside bus stops next year. The free Wi-Fi network will also be built at 24 large parks including Boramae Park, Dream Forest and Yeouido Park, which are under the direct management of the city by next year. Wi-Fi terminals will also be installed at 300 additional welfare centers for the elderly and the youth.

The Seoul Metropolitan Government plans to double the number of public Wi-Fi terminals to 20,000 units by the end of this year. (via Pulse)

Unity Line to launch broadband on ferries from Poland to Sweden

Traveling to Europe? You Should Reserve This Tickets Ahead

Want to explore the quality of internet across Europe?

This airport lets travelers check their coats before leaving…

These Are the Biggest Travel Trends of 2020, According to…

Amtrak Offers Valentine’s Day Buy One, Get One Free Sale

Apple Pay takes 5% of global card payments, on pace for 10%…

Three will use its ‘Real 5G’ at London Fashion Week to…

Disneyland Tickets Going up to $154 a Day

Safer, smoother travel for Europeans as the EIB lends EUR…

Feb 13, 2020
Would you like to save on roaming?
Top up your SIM card here
Stay with us
Search flights
Like Us On Facebook
Find your hotel
Booking.com
5G smartphones store