In recent testing by RootMetrics®, Sprint is #1 with the fastest download speeds in Manhattan, NY. 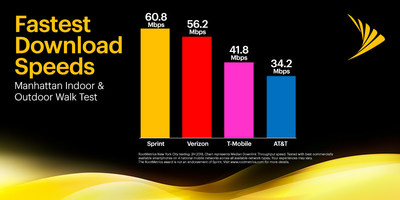 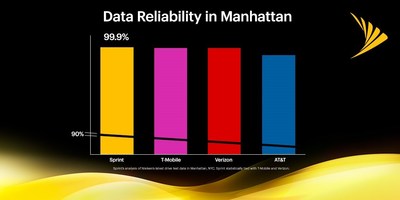 “Our Next-Gen Network investment is making a difference and we’re seeing tremendous performance in Manhattan and across the greater New York City area,” said Mark Walker, Sprint’s vice president for Network, Northeast. “We’re excited to roll out the most advanced technologies in wireless to give our customers faster data speeds and stronger reliability, all on a Network Built for Unlimited.”

Sprint’s Next-Gen Network Investment in Manhattan
This year, Sprint has spent billions on its Next-Gen Network build, unleashing the company’s strong spectrum holdings to dramatically improve coverage, speed and reliability for its customers. Across New York City and the Tri-State area, Sprint continues to add new cell sites and upgrade existing cell sites to use all three of its spectrum bands (800 MHz, 1.9 GHz and 2.5 GHz) to improve coverage and provide its fastest, most reliable service. The company has also added thousands of indoor and outdoor small cells throughout the greater metropolitan area to deliver even more coverage, capacity and speed using unobtrusive units on telephone poles, street lights and other infrastructure.

To spread the word about its network improvements, along with offering the best value for Unlimited with Basic, Plus and Premium plans and other great holiday deals, the company is conducting an aggressive marketing campaign through the holiday season. Efforts include TV, radio, outdoor and digital ads, along with in-store signage and materials.

Sprint 5G Coming to NYC!
Sprint’s execution of its award-winning 5G strategy is well underway. The company is deploying 5G-ready Massive MIMO radios in New York City to launch its mobile 5G service in the first half of 2019.

Massive MIMO is a breakthrough technology that dramatically improves the capacity of Sprint’s LTE Advanced network with equipment that is software upgradable to 5G. Sprint’s 64T64R Massive MIMO radios support split-mode, enabling the company to offer LTE and 5G simultaneously on the same radio. Initial results from early deployments show Massive MIMO is driving a 4X average increase in capacity and speed with peak increases up to 10X over LTE.

5G promises new levels of innovation and progress to connect people, places and the billions of things Sprint customers do with blazing fast speed and ultra-reliable wireless connectivity. With Massive MIMO at the foundation of its mobile 5G service, Sprint can keep meeting its customers’ demand for unlimited data and high-bandwidth applications.

Kuwait-based COFE App “One of the Top 50 Startups to Watch For,” Says FORBES Middle East

Vodafone Spain gives away 30,000 SIMs with 60GB to hospitals and students

Thank a Helper, Be a Helper with #GiveThanksNotPranks – T-mobile