The global smartphone market showed signs of recovery ending a long period of continuous quarterly YoY declines. Shipments during 3Q 2019 were flat at 380 million units. The two markets that helped halt the slide are India, which has been growing steadily, and China, now showing a slower decline.

Need an international sim card? Get it here. 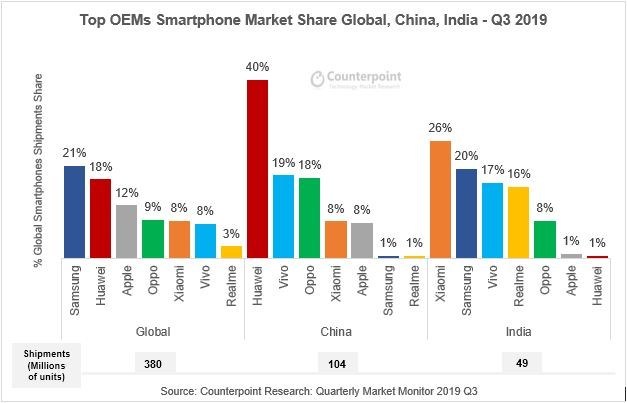 MVNO Market is Driving driven by the increasing penetration…

China’s Q1 smartphone sales may halve due to…

The upcoming holiday season should drive smartphone demand into growth for the second half of the year.

Counterpoint Research believes the key OEMs with the largest installed bases, especially in developed regions, will rely on 5G as a key point of differentiation and will encourage their users to upgrade. Already, 5G rollouts have been faster than 4G was in its first few months, with 15 commercially available 5G devices and many more lined-up for launch in the last few months of 2019.

Nevertheless, 5G smartphones only accounted for 2% of shipments in Q3 2019 and will contribute relatively little to the overall market for the full year 2019. But, 2020 will likely be a breakout year for 5G smartphone adoption, rekindling smartphone demand.

IT Spending in EMEA to Return to Growth in 2020

Rogers Roam Like Home, Fido Roam Expands to Cuba and 9 Other Destinations