Passengers travelling on Metro de Santiago services and EFE suburban rail lines in Chile can now pay their fares at station ticket gates with their mobile device as well as with a contactless bank or transit smartcard.

“By facilitating cashless payment, the upgraded fare collection system will be able to cater for people making occasional journeys without a smart card.

“It will also provide for fare integration and the provision of discounts and capping,” the Railway Gazette reports.

Metro, the Regional Government and the Municipality of Maipú approve the new free parking for bicycles at the Santiago Bueras station on Line 5 at the end of 2021

As part of the expansion of the “Línea Cero” project, the president of the Santiago Metro Board of Directors, Louis de Grange; together with the Governor of the Metropolitan Region, Claudio Orrego; and the mayor of Maipú, Tomás Vodanovic, inaugurated the first free parking lot with capacity for 10 bicycles on the surface of the Santiago Bueras station, on Line 5, which is the first station of the 11 stations that will be implemented in a first stage, which It will run until February 2022.

The alliance between Metro de Santiago and the Metropolitan Regional Government to increase the scope of the “Line Zero” project consists of the implementation of new parking lots for bicycles in 103 stations of the network, thus covering all existing stations (136) – considering the that already have parking spaces – within four to five years. In this way, the initiative seeks to cover in a homogeneous way the different Metro lines and districts of the city. Each module will have a capacity to house 10 bicycles in the stations that are not terminals and 40 bicycles in those that are terminals. 43 stations will be financed and executed by Metro and 60 stations will be financed and executed by the Metropolitan Regional Government. 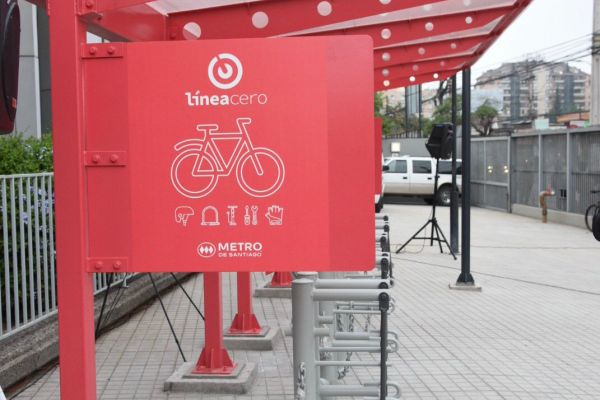 The governor of the Metropolitan Region, Claudio Orrego, pointed out that “a city that can be pedaled, and a city with less congestion, is a healthier and more decontaminated city. A Santiago that can be pedaled is closer every day. In a big city like ours, we don’t everyone can go by bicycle from Maipú to Las Condes, consequently, alliances are needed between the bicycle and other means of transport such as the Metro.Today the Metro crosses the city, democratizes it and integrates it, and in this alliance with the Regional Government what we are doing is moving towards sustainable transport “ .

Meanwhile, the chairman of the Santiago Metro Board of Directors, Louis de Grange, commented that “bicycles have acquired a greater role in our streets and are an important transportation alternative for many people. That is why, through the “Line Zero” project, we seek to promote intermodality between two non-polluting means of transport, such as the Metro and the bicycle, bringing people closer to living in a better city” .

In a first stage, in addition to the Santiago Bueras station on Line 5 inaugurated in December, Metro is advancing in the implementation of parking lots in five stations, whose implementation will conclude in December of this year. These stations are Pedrero and Las Parcelas, on Line 5, Los Quillayes, on Line 4, Los Libertadores, on Line 3, and Lo Ovalle, on Line 2. Meanwhile, the Metropolitan Regional Government is working on another five stations: Carlos Valdovinos and Cumming, on Line 5, which will be ready at the end of December 2021; Fernando Castillo Velasco, of Line 3, whose installation will materialize in January 2022; and Mirador on Line 5 and Rojas Magallanes on Line 4, which will be implemented in February 2022.

“In the same way that we move forward with our expansion projects for new lines and extensions of existing lines, at Metro we are also committed to the growth plan for free bicycle parking. The project that we are developing jointly with the Metropolitan Regional Government will allow us to cover our entire network of stations. Today we start with the inauguration of the new parking lot at the Santiago Bueras station on Line 5, which has a capacity for 10 bicycles and, as part of the first stage of implementation of this project, between now and February of next year we will set up new parking lots in a total of 11 stations” , added the chairman of the Metro Board.

Regarding the implementation of new parking lots at the Santiago Bueras station located in Maipú, the mayor of the commune, Tomás Vodanovic, commented that ” from the beginning we always proposed a Maipú for the future, a sustainable Maipú, where cycling has to to be a fundamental pillar of the transfers that Maipucinas and Maipucinos are carrying out every day. This project that Metro and the Regional Government are bringing us today undoubtedly goes in the direction of promoting bicycle transfers, sustainable transfers that allow us to continue building that Maipú of the future” .

The implementation of new parking for bicycles in 103 stations of the Metro network considers an estimated investment of 2.46 million dollars (2,140 million Chilean pesos). It is projected that the commissioning of all the parking lots of this joint project between Metro and the Regional Government will end in 2024.

The new parking lots are made with reinforced steel structures and chains that secure the bicycles in an integral way, allowing the front wheel of the bicycle to be chained with the individual use of a U-lock type lock, and also to store the seat and helmet . They also have lights (solar energy) and a roof to protect the bicycle.

Along with this, they will have a service station with a set of tools that will allow users to inflate the wheels and do minor maintenance, as well as a USB port to charge the cell phone.