A new study from Juniper Research found that operator revenues from international mobile roaming are expected to recover slightly, following a decline in 2017 after the introduction of RLAH (Roam Like at Home) in Europe and other markets. However, overall roaming revenues are expected to stay flat over the next 4 years, representing around 6% of total operator billed revenues and $51 billion in value.

RLAH enables mobile users to use their monthly voice, data and messaging allowance while roaming without incurring additional charges.

The new research, Mobile Roaming: Regulations, Opportunities & Emerging Sectors 2019-2023, found that, driven by the introduction of RLAH packages in EU and other regions such as North America and Asia-Pacific, the roaming market witnessed a significant rise in data usage and traffic. In 2017, Juniper estimates that data traffic grew by 200% globally and by 260% in West Europe. 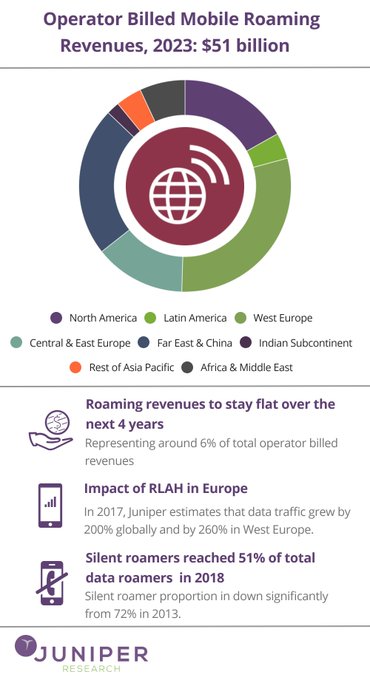 Research author Nitin Bhas added: “While the overall proportion of silent roamers continues to fall in many markets, driven by RLAH and cheaper bundles, the market also witnessed operators extending RLAH to more countries over the past 12-18 months. Additionally, a number of neighbouring countries are announcing roam-free intra-regional agreements, similar to the EU”.

Juniper estimated that the proportion of silent roamers not using any data roaming services in 2018 accounted for 51% of total data roamers globally, down from 72% in 2013.

Following Britain’s decision to leave the EU, it has been reported that, in the event of a no-deal Brexit, mobile operators will be able to implement roaming charges if needed. Under such a scenario, Juniper expects that the average roaming spend per active UK roamer would nearly double by the end of 2022 due to higher costs, compared to our current estimates of $58.

However, Juniper considers such a situation to be unlikely and instead operators will continue to focus on other revenue streams, such as providing managed services in the IoT sector.