Cisco has released new forecasts for wireless data traffic, as part of its Visual Networking Index. The company expects mobile traffic to represent nearly a fifth of global IP traffic by 2022, reaching 930 exabytes annually, compared to just 9 percent in 2017. Wi-Fi’s share of global traffic will also increase over the forecast period, to 51 percent from 43 percent, while wired internet drops to 29 percent in 2022 from nearly half in 2017.

Fourth-Generation (4G) traffic accounted for 72% of mobile traffic in 2017. 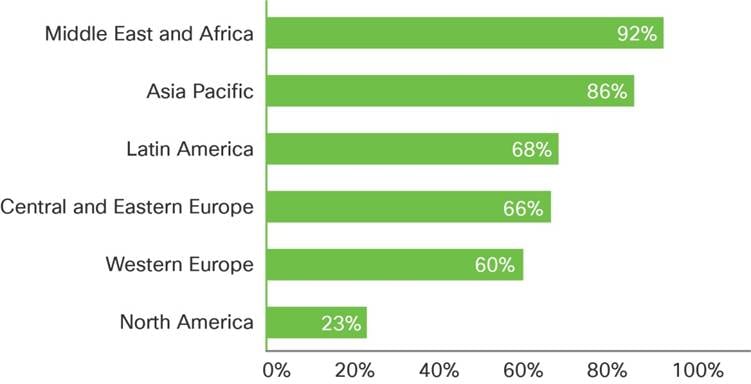 Globally, smart devices represented 53 percent of the total mobile devices and connections in 2017; they accounted for 92 percent of the mobile data traffic. (For the purposes of this study, “smart devices” refers to mobile connections that have advanced multimedia/computing capabilities with a minimum of 3G connectivity.) In 2017, on an average, a smart device generated 10 times more traffic than a nonsmart device.

Smartphones (including phablets) represented only 51 percent of total mobile devices and connections in 2017, but represented 88 percent of total mobile traffic. In 2017, the typical smartphone generated 47 times more mobile data traffic (2.3 GB per month) than the typical basic-feature cell phone (which generated only 50 MB per month of mobile data traffic).

Globally, there were 526 million wearable devices (a sub-segment of the machine-to-machine [M2M] category) in 2017. Of these, 19 million wearables had embedded cellular connections.

In 2017, 47 percent of mobile devices were potentially IPv6-capable. This estimate is based on network connection speed and OS capability.

The Mobile Network Through 2022

Mobile data traffic will reach the following milestones within the next 5 years:

●   Monthly global mobile data traffic will be 77 exabytes by 2022, and annual traffic will reach almost one zettabyte.

●   The average global smartphone connection speed will surpass 40 Mbps by 2022.

●   Smartphones will surpass 90 percent of mobile data traffic by 2022.

●   4G connections will have the highest share (54 percent) of total mobile connections by 2022.

●   Nearly three-fifths of traffic (59 percent) will be offloaded from cellular networks (on to Wi-Fi) by 2022.

By 2022 there will be 1.5 mobile devices per capita. There will be 12.3 billion mobile-connected devices by 2022, including M2M modules—exceeding the world’s projected population at that time (8 billion) by one and a half times.

By 2022, 4G will be 54 percent of connections, but 71 percent of total traffic. By 2022, a 4G connection will generate nearly twice as much traffic on average as a 3G connection.

By 2022, 76 percent of all global mobile devices could potentially be capable of connecting to an IPv6 mobile network. There will be 9.4 billion IPv6-capable devices by 2022. 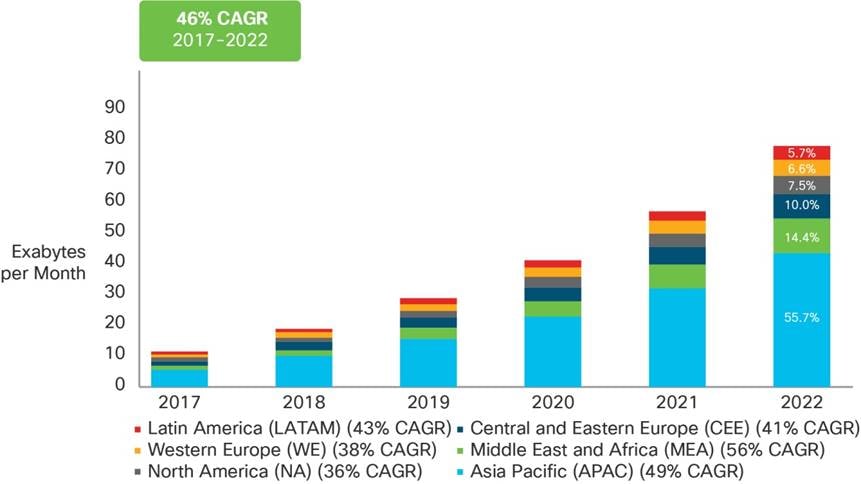 By 2022, mobile-connected tablets and PCs will generate 6.8 GB of traffic per month on average, a doubling over the 2017 average of 3.3 GB per month. Aggregate traffic associated with PCs and tablets will be three and a half times greater than it is today, with a CAGR of 28 percent.

The average smartphone will generate 11 GB of traffic per month by 2022, more than a four and a half-fold increase over the 2017 average of 2 GB per month. By 2022, aggregate smartphone traffic will be seven times greater than it is today, with a CAGR of 48 percent.

The Middle East and Africa will have the strongest mobile data traffic growth of any region with a 56 percent CAGR. This region will be followed by Asia Pacific at 49 percent and Latin America at 43 percent.