The latest forecasts from Canalys’ ongoing smartphone research show that the Middle East (excluding Turkey) is expected to be one of the best-performing regions in 2023 in terms of smartphone shipment growth. The market will be driven by economic recovery and digital initiatives from the countries of the Gulf Cooperation Council. Middle East smartphone market

Shipments are forecast to reach nearly 46 million in units and US$15 billion in sales value in 2023, representing 13% growth and bringing the region’s smartphone ASP to US$325. 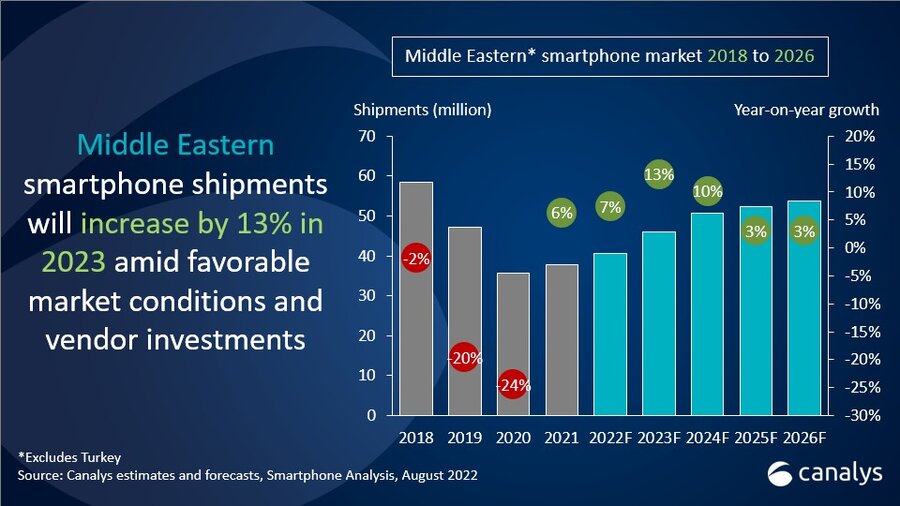 “The Middle East is on the fast track to digitalization post-pandemic,” said Dubai-based Manish Pravinkumar, Senior Consultant at Canalys. “The governments in UAE and Saudi Arabia are prioritizing digital investments, such as 5G, to drive the economy toward a knowledge-based economy. Smartphones are leading the transition to a digital lifestyle, driven by statewide consumer initiatives, such as digital payment. In the short term, the strong smartphone market recovery is underpinned by the region’s rapid recovery of business and leisure travel, and relaxed long-term visa policies, such as Golden Visas, which are driving investments across sectors from real estate to start-ups. Global events, particularly the FIFA World Cup 2022 in Qatar, will also bring opportunities to various business sectors in neighboring countries. These are all positive signals luring smartphone vendors to further invest in the region and strengthen their market shares, contrasting with the negative business and consumer outlook in other regions.”

“The region’s polarized consumer segment has also provided different opportunities for emerging players, especially those making inroads at the high end. On the one hand, the region is attracting a large population of working immigrants, bringing new demand for mass-market devices. On the other hand, there is a lot of wealth in the region and more than half of the sales value in the Middle East (excluding Turkey) is from the US$500-plus price band. It is a segment dominated by Apple and Samsung, which together account for nearly 96% of shipments. Chinese vendors, such as HONOR, OPPO and Xiaomi, aspire to challenge the status quo by increasing their investments significantly in the region over the years,” said Canalys Analyst Sanyam Chaurasia. Middle East smartphone market

“There is no quick way to gain local consumers and the channel’s mindshare. It requires more than just brand-level investments,” said Pravinkumar. “The full stack device service and ecosystem approach would take years to build with local retail channels and operators, but it is the foundation of sustainable development in the region for smartphone vendors.”