Strategy Analytics estimates Apple shipped 80 million iPhones and topped the global smartphone market with a healthy 22% share in Q4 2021. Demand was strong for the new iPhone 13 series in China and other markets. Samsung shipped 69 million smartphones, up +12% YoY, for 19% global marketshare in Q4 2021. Samsung had a good quarter, led by its innovative Flip and Fold 5G models. Samsung grew faster than all its major rivals. Samsung ramped up volumes in North and South America amid the withdrawal of LG, however the competition in Asia remained fierce. Samsung maintained first place for full-year 2021, with 20% global smartphone marketshare, followed by Apple in second spot.

Xiaomi shipped 45 million smartphones and took third place with 12% global marketshare in Q4 2021, up slightly from 11% a year ago. Xiaomi benefitted from the withdrawal of Huawei and LG and expanded its retail footprint into all major regions last year. OPPO (OnePlus) held fourth spot and captured 9% global smartphone marketshare during Q4 2021. Vivo stayed fifth with 8% global smartphone marketshare in Q4 2021. OPPO (OnePlus) and Vivo both lost ground in the final quarter of last year, as 5G competition from Honor and other smartphone competitors intensified sharply at home in China.

Global competition among other major smartphone brands, beyond the top-five, was fierce during Q4 2021. Honor, Lenovo-Motorola, Realme and Transsion all outperformed the overall market and posted double-digit growth rates. Honor continued to soar in China. Lenovo-Motorola gained share from LG in the Americas. Realme had a very strong quarter in India, China, and elsewhere. Transsion held firm across the Africa region.

Strategy Analytics forecasts global smartphone shipments to grow a further +3% YoY in full-year 2022. This year will be a tale of two halves. Component shortages, price inflation, and Covid uncertainty will continue to weigh on the smartphone market during the first half of 2022, before the situation eases in the second half due to Covid vaccines, interest rate rises by central banks, and less supply disruption at factories. 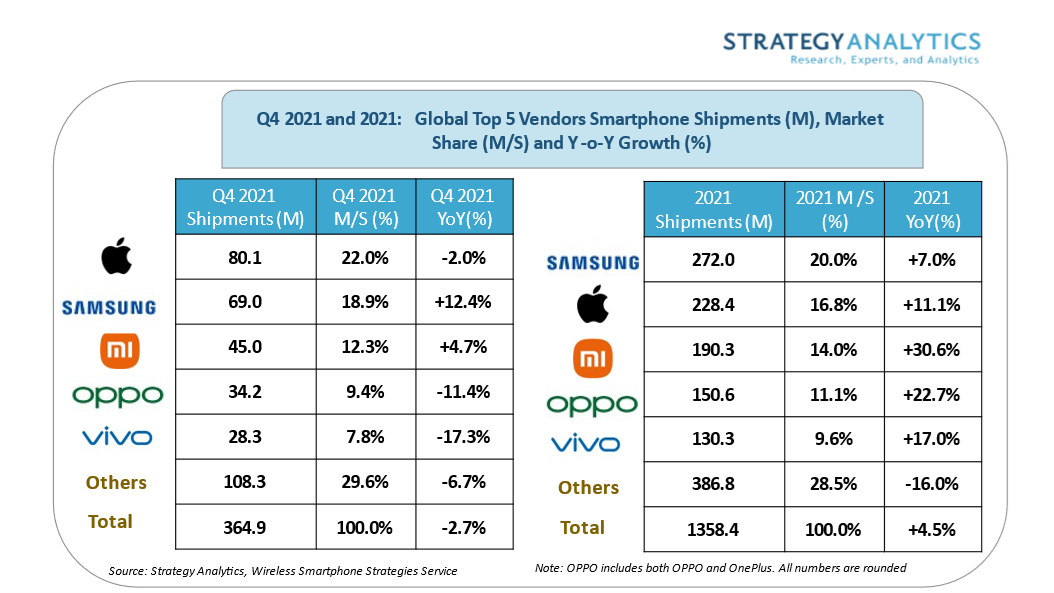 Elimobile Launches the First Tokenized Telco, Partners with Elite Token to Create a…