75% of iPhone users in the USA have enabled Apple Pay

According to Loup Ventures research, 75% of iPhone users in the USA currently have Apple Pay enabled, up from 50% in 2020 by a whopping 25%.  iphone apple pay

The study also demonstrates that these adoption rates contrast with merely 20% in 2017 and 10% in 2016 following Apple Pay’s formal launch in 2014. 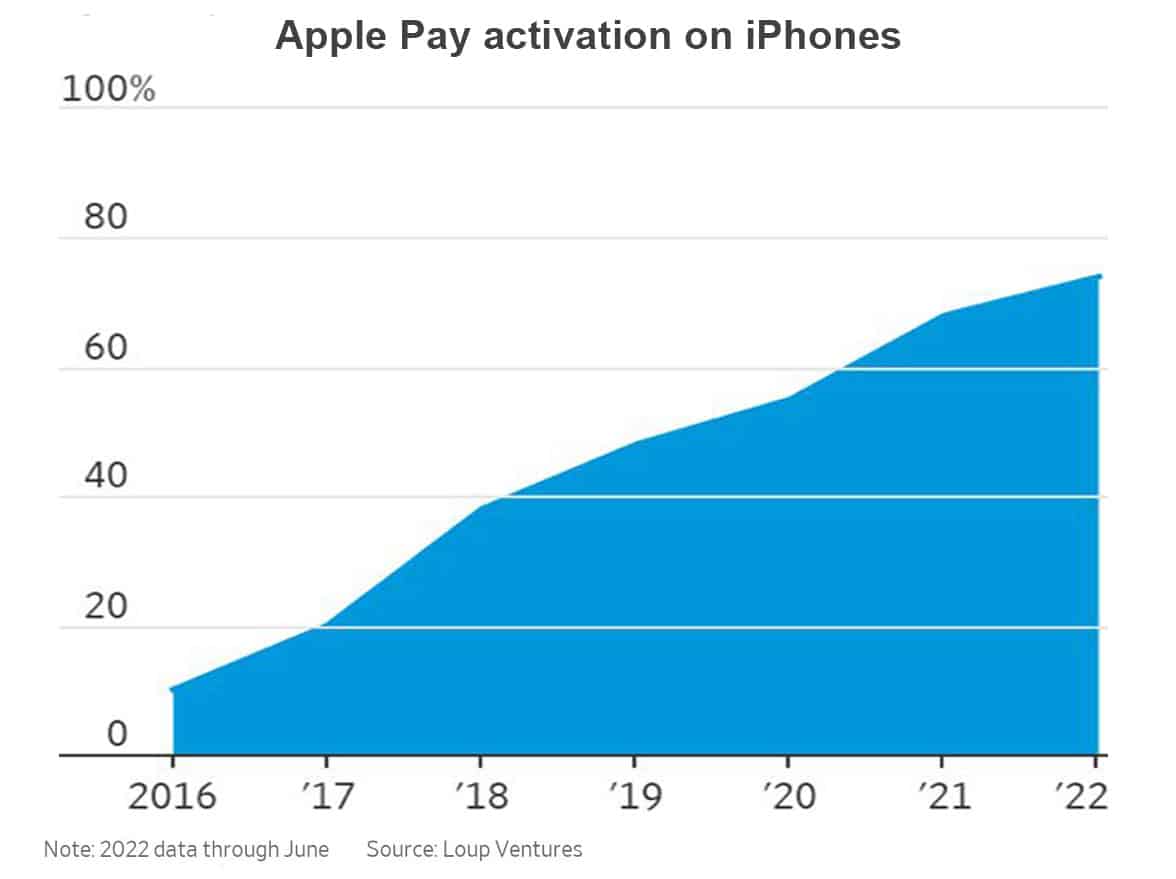 “The activation rate of Apple Pay has begun to resemble the classic trajectory of tech adoption, which suggests that what is now a tiny slice of Apple’s pie can get much bigger, along with the overall market for contactless payments,” the Wall Street Journal (WSJ) reports.

“Such tap-to-pay spending accounts for nearly 20% of Visa’s face-to-face transactions in the US, but the rates in big cities have climbed above 25%, with the Bay Area at 30% and New York reaching 45%. Apple Pay is also the top payment app for teenagers, according to investment firm Piper Sandler. As teens and cities go, so goes the nation.”

Apple itself says that “90% of retailers across the US now take Apple Pay. The number that accepted contactless payments when the service was introduced was 3%,” according to the WSJ’s report.

“The more places that accept Apple Pay, the more value the service provides, and the more people upload their credit and debit cards to the Wallet app. They can use Apple Pay to order stuff online, send money to friends and buy things in a physical store by holding it near a contactless reader.

“The fees Apple collects from banks whose cardholders use Apple Pay amount to less than 1% of the company’s overall revenue, according to [Loup Ventures analyst] Mr Munster’s estimates, but Apple generates so much profit from iPhone sales that even billions of dollars would be a rounding error. Apple Pay exists to improve the iPhone experience.”

Apple Pay can be a very profitable segment on its own. However, it will have a much bigger impact on other products and services offered by Apple. For example, widespread use of Apple Pay will also help increase the sales of wearables like watches from which customers can make payments.

To encourage more transactions, Apple has provided discounts. Customers who used Apple Pay at the check-out were given four months of free coffee at Panera Bread. When consumers spend $10 or more and pay using Apple Pay, a 20% discount is now available on GrubHub. This is a similar strategy to Alipay and WeChat Pay in China where these companies offered massive discounts to attract customers in making smaller transactions on their platform.

Apple has been making some progress in the payments industry with a higher active user base and more transactions on Apple Pay. However, it will likely have a very low market share in important international regions like Europe, China, India, and others. Even in the domestic US market, Apple will be competing against big giants like Amazon who can invest significant resources in increasing their own customer base. iphone apple pay

Piper Sandler published a survey showing that Apple Pay is the most popular payments app with Generation Z teenagers in the US in April.