While Samsung’s shipments declined 3% YoY, it was the only top-five smartphone brand to grow QoQ. Its market share rose to 23% from 19% last quarter, resulting in Samsung taking the top spot from Apple in Q1 2022.

By Sandra Dragosavac On Apr 29, 2022 672
Image by PhotoMIX-Company on Pixabay

The global smartphone market declined by 7% YoY, shipping 328 million units in Q1 2022, according to the latest research from Counterpoint’s Market Monitor service. The decline was caused by ongoing component shortages, as well as COVID resurgence at the beginning of the quarter and the Russia-Ukraine war towards the end. Global Smartphone Market q1 2022

The global smartphone market also, as expected, had a seasonal decline of 12% QoQ.

Commenting on the overall market dynamics, Senior Analyst Harmeet Singh Walia said, “the global smartphone market presented a mixed bag in the first quarter of 2022. Samsung seems to have overcome component shortages that affected its supply last year, as evidenced by higher-than-expected growth in its shipments despite a late flagship launch. Major Chinese OEMs such as Xiaomi, OPPO* and vivo, meanwhile, faced a greater component supply crunch, resulting in their shipments falling by 20%, 19% and 19% YoY respectively.” 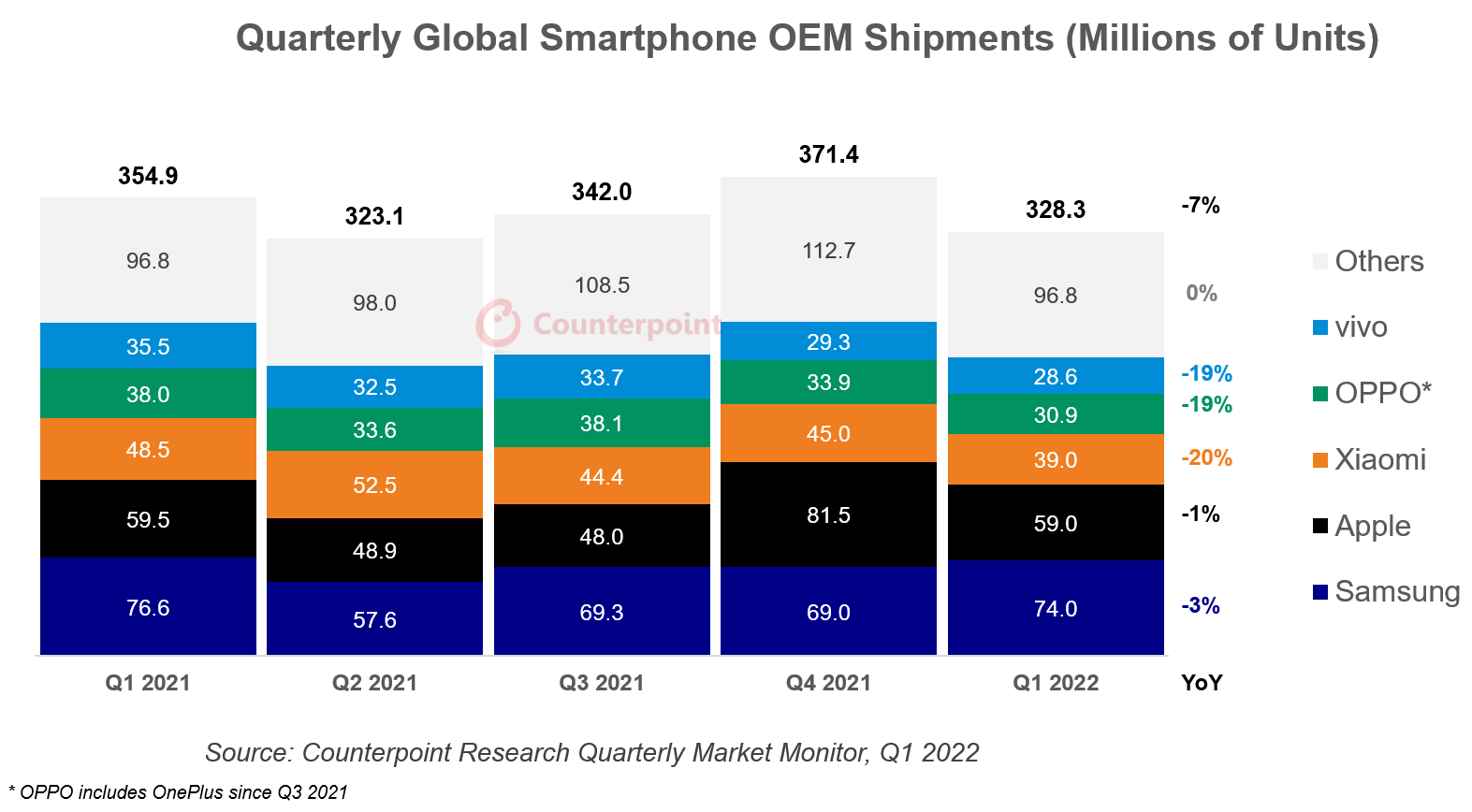 Research Director Jan Stryjak noted, “while component shortages are expected to ease soon, the Russia-Ukraine war poses a new challenge to the recovery of the global smartphone market. In Q1 2022, the war had little impact on global smartphone shipments. Although Samsung and Apple withdrew from the Russian market in early March, the consequences are, at the moment, relatively small on a global scale. The two vendors make up around half of Russian smartphone shipments, but their combined shipments in Russia account for less than 2% of total global smartphone shipments. However, the impact of the war may develop wider ramifications if it leads to a drop in availability of raw materials, a rise in prices, further inflationary pressure and/or other vendors withdrawing from Russia.”

HONOR’s shipments grew by 148% YoY to 16 million units in Q1 2022 as it continued rebuilding supplier relationships post its separation from Huawei. It also saw a 7% QoQ shipment growth despite a seasonal contraction of the global smartphone market. Consequently, its market share rose to 5% this quarter, up from 4% in the last quarter and 2% in the same quarter last year. It also did well in its home country of China where it is among the fastest-growing smartphone brands.

realme shipped 14.5 million units in Q1 2022, up 13% YoY. This was driven by realme’s expansion in the overseas markets, especially in Europe where its shipments grew by 163% YoY. At the same time, its global shipments have declined by 30% QoQ after a record quarter while its European shipments have taken a smaller hit of 7% caused by the Russia-Ukraine war. In India, realme was the only brand among the top five players to experience YoY growth (40%) in Q1 2022. It captured the third spot during the quarter.

Transsion Group, which includes Tecno, Infinix and itel, continued its strong performance with a 23% annual growth. This was driven primarily by Infinix, which grew by 76% YoY and 4% QoQ with its shipments increasing in India, the rest of Asia Pacific and Middle East and Africa. Tecno’s shipments also grew by 28% YoY while itel fell by 3%. Global Smartphone Market q1 2022