The Galaxy Z Fold 2 was released about two years ago, but USA owners of the smartphone are still waiting for some rather basic SIM-related functions to be enabled on their handset. Well, that day has finally come, or rather, it came and went by more than a week ago and no one noticed, XDA Developers reports. Galaxy Z Fold 2 usa

The Galaxy Z Fold 2 comes with an embedded SIM (eSIM) in addition to the physical SIM slot. The former was enabled for customers outside the US way back in late 2020 through a software update, while stateside customers have been left hanging all this time.

Thankfully, Samsung is finally doing the needful, even if it waited too long a time for it. The June 2022 security update for the Galaxy Z Fold 2 enables eSIM support on the device for US customers. It also enables Dual SIM Dual Standby, which means you can receive calls on the second SIM if you’re already on a call on the first SIM, and vice versa.

You can register an eSIM on your Z Fold 2 if your carrier supports it by opening the Settings app on your phone, tapping Connections, and selecting SIM Card manager, where you should find an Add mobile plan button under the eSIMs heading. Your carrier should also have helpful instructions for setting up your eSIM connection on its website or local store.

As previously reported, the June update also contains some new camera features, such as auto framing in the camera app and video calls and improved Night portrait photography. Some carrier-locked units have even begun receiving the July 2022 update, in fact, and if you didn’t get the new features in the June update, the July update should bring them along for sure. 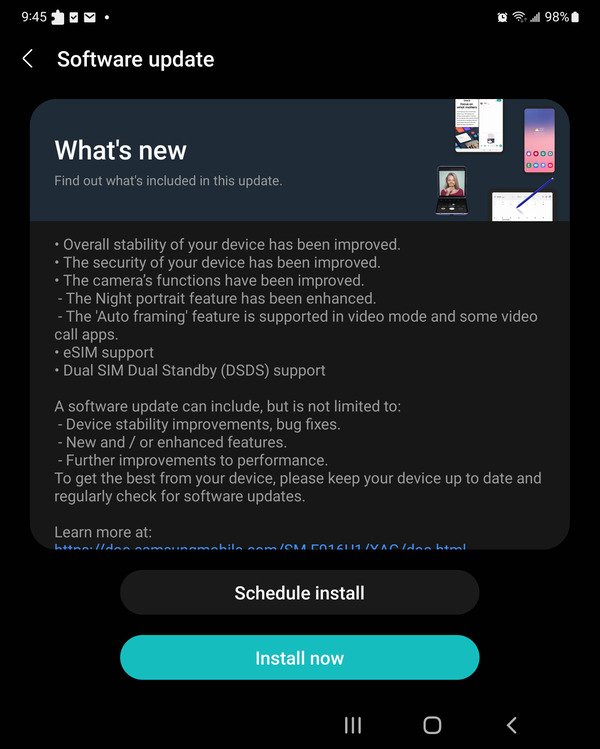 As a matter of fact, Samsung has also started rolling out the July 2022 Android security patches to the US Galaxy Z Fold 2 units. The software version can be identified by the build number of F916USQS2HVF3 (carrier) / F916U1UES2HVF6 (unlocked). Due to the relatively tiny difference (less than a week) between the two releases, it might be possible that your device will directly pick up the July build. Since the updates are cumulative in nature, you will still get every feature improvements from the June release, including the eSIM and DSDS support.