Before the holiday season, Deutsche Telekom announced the result of its 5G rollout in 2021. The operator has activated more than 63,000 5G antennas so far in Germany. Its 5G network has covered 90% German population.

Since the operator kicked off the 5G service in five big German cities in September 2019, Deutsche Telekom has rapidly extended the 5G coverage (see the chart below). Deutsche Telekom’s rival, Vodafone, also achieved a fast expansion of 5G coverage. Vodafone’s 5G network has covered more than 35 million German people by November 2021, which was faster progress than planned. 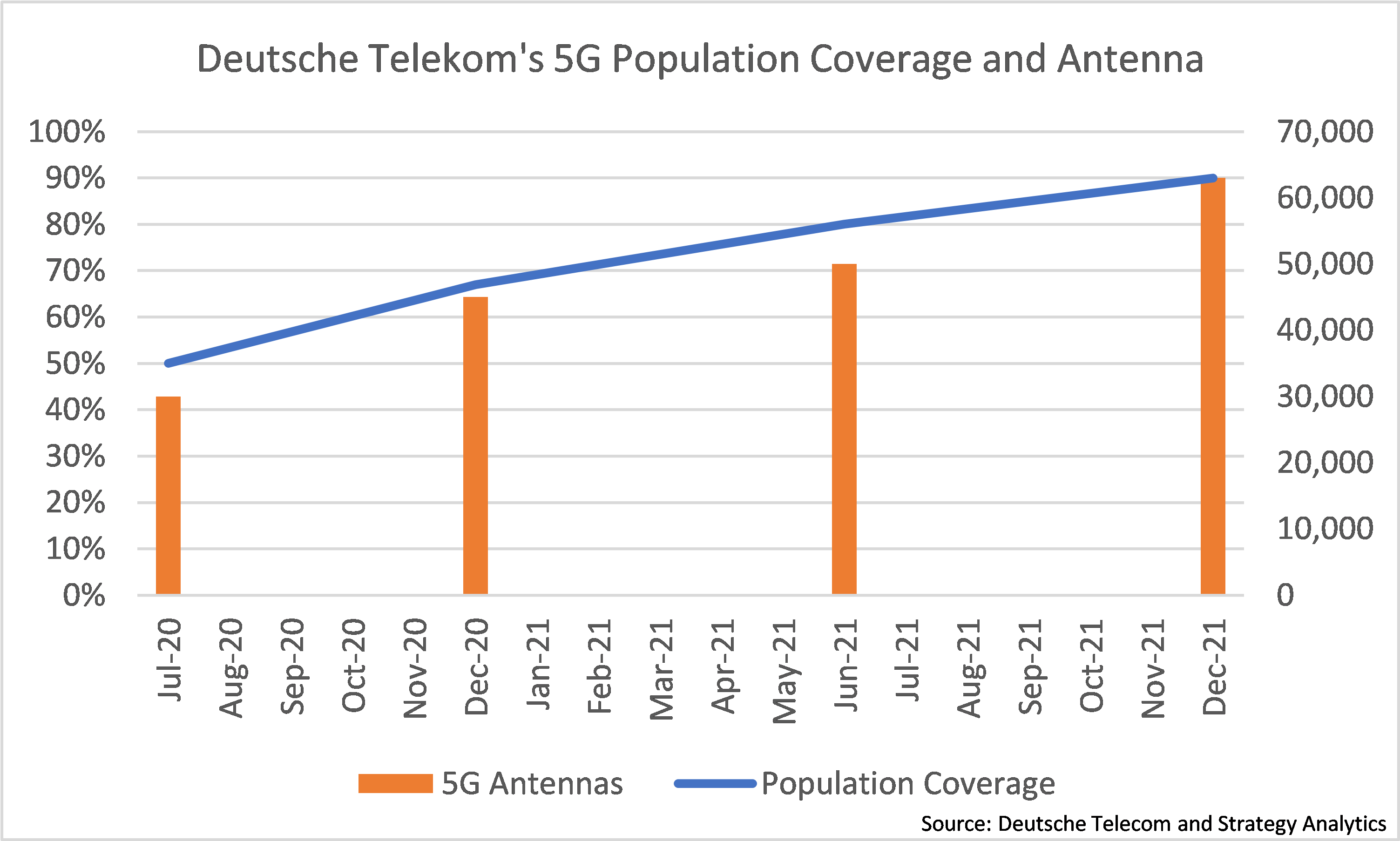 German telecom regulator – BNetzA – confirmed the 5G coverage expansion. The BNetzA’s data show that over 53% of the country was already covered with 5G by the end of October 2021, from at least one operator.

The extensive 5G coverage has significantly improved the overall experience of German mobile users. The mobile network test 2022 conducted by umlaut and connect (formerly P3 Test) recently showed that all three German mobile operators got a higher score than last year. Deutsche Telekom took the overall victory with 944 points, “with only 6 points missing from the top grade ‘outstanding.’” Vodafone also achieved its “strongest result to date with 913 points.”

In addition to the driving test and walk test that focus on the maximum possible performance in the networks, the umlaut and connect test also consists of a crowdsourcing test that verifies the user experience in the real world. Around 1.7 billion measurement values were collected and analyzed in Germany from mid-May to October 2021. For example, to assess the data speed experience, the samples were recorded as a grid of 2 x 2 km tiles and categorized into three speed classes. Compared with last year’s results, the availabilities of all three speed classes in all three networks have been improved.  germany 5g coverage

Download Speed Experience of Crowd Test by Umlaut and Connect

Vodafone also adopts the C-Band and Sub-3GHz convergence strategy, i.e., deploying 5G in 3.5 GHz, 1800 MHz, and 700 MHz, to get a good balance between coverage, capacity, and cost, through leveraging the bandwidth and radio propagation characteristics of each frequency band.

This strategy significantly accelerates the 5G rollout in Germany. The BNetzA’s data show that all network operators initially deploy the 3.6 GHz spectrum in urban areas for the exclusive use of 5G. At the same time, Sub-3GHz DSS technology helps Deutsche Telekom and Vodafone reach a high level of 5G coverage.

Contribution to Equality and Sustainability

Strategy Analytics predicts that the reduction in inequality and environmental sustainability will feature much more in operator messaging in 2022. The covid-19 pandemic has made regulators and operators realize the importance of delivering affordable connectivity to more disadvantaged sections of society. Fixed Wireless Access (FWA) is a cost-effective tool to provide affordable broadband connectivity.

The overall energy usage of the telecoms industry accounts for 2–3% of global energy consumption, according to GSMA.  Meanwhile, energy consumption constitutes between 20–40% of network OPEX. An increasing number of leading operators have made clear commitments to the net-zero emission target. All three incumbent mobile operators in Germany have committed the net-zero target.

5G in Sub-3 GHz can play a key role in both areas. Vodafone Germany’s 5G base stations in the 700 MHz band can “supply a particularly large area of up to 8 kilometers.” “The extensive coverage range can provide cost-effective wireless broadband links to rural areas.

The extensive coverage of Sub-3GHz 5G can also help mobile operators accelerate the shutdown of legacy 3G networks. In Germany, Deutsche Telekom and Vodafone turned their 3G networks off completely this summer. Telefónica is expected to have completed this step soon. According to German regulator BNetzA, only about 13.3% of the country was covered by 3G by the end of October 2021. The spectrum freed up will be used for the more efficient 4G and 5G networks; meanwhile, the shutdown of 3G networks has not hurt the coverage situation. The share of dead spots (where no mobile coverage) and white spots (where no mobile broadband coverage) has even fallen, according to BNetzA. The shutdown of legacy 3G networks can effectively lower the overall network energy consumption and contribute to the net-zero target.

Therefore, the combination of C-Band and Sub-3 GHz band not only enables German operators to accelerate 5G rollout and improve user experience but also can support mobile operators to reach the targets on equality and sustainability. 5G network with a multi-band spectrum portfolio will be the foundation of building a competitive mobile business and achieving sustainable growth in the next decade.

Why Private 5G Networks Will Be Game-Changing For Some Companies