More than 14 billion eSIM devices will be shipped between 2021 and 2030, covering all form factors such as hardware-based eSIM (eUICC), iSIM (iUICC), nuSIM and Soft SIM, according to Counterpoint’s latest eSIM Devices Market Outlook report. eSIM uptake is poised to grow across a gamut of connected devices over the next decade, thanks to the flexibility, cost efficiency, security and other myriad benefits offered by the embedded technology. eSIM Devices

In 2021, more than 350 million hardware eSIM-capable devices were shipped across a host of categories such as smartphones, smartwatches, tablets, IoT modules and connected cars. In the next five years, hardware-based eSIM (eUICC) will remain the dominant eSIM form factor and will account for more than half of the shipments. In 2022, we will witness the onset of iSIM (iUICC) form factor, which is a SIM integrated into the chipset (SoC) and offers a multitude of benefits.

Commenting on the transition in SIM form factors, Research Vice President Neil Shah said, “The physical MFF2/WLCSP form-factor soldered eSIM chip has been the go-to standard for eSIM implementation even with the rise of alternative implementations such as soft SIM and nuSIM over the last decade. However, the iSIM (iUICC) form factor will grow the fastest as the industry stakeholders move forward together to offer end-to-end support from the SIM enablement and management perspective later this year.

The first set of mainstream iSIM adoption will be seen across IoT applications driven by leading IoT chipset and module players such as Quectel, Telit, Sequans and Sony Semi (Altair) in partnership with eSIM enablement players like Kigen and G+D. Other key stakeholders driving the segment would include Qualcomm, Thales, IDEMIA, Truphone, Redtea Mobile, Apple, Samsung, Nokia and more. Beyond 2027, iSIM is projected to take over as the dominant SIM form factor, with the shipments of iSIM-capable devices poised to scale to 7 billion units between 2021 and 2030.” 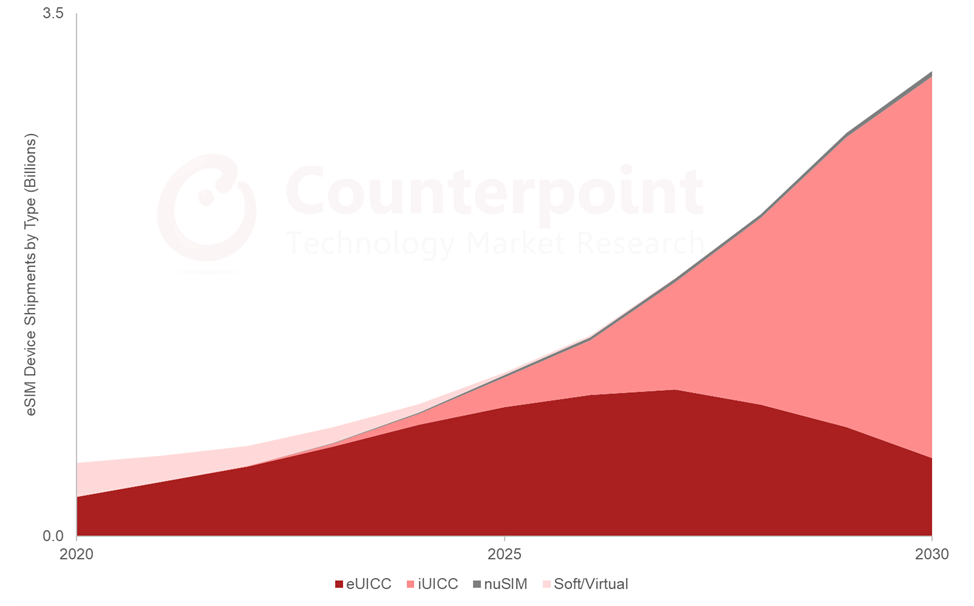 Commenting on eSIM adoption across categories, Research Analyst Ankit Malhotra said, “Smartphones will lead the charge in terms of eSIM-capable device shipments over the next five years. The anticipated launch of eSIM-only iPhone should act as an inflection point for the industry with other OEMs expected to follow suit soon after. Earlier this year, Vodafone, Thales and Qualcomm successfully showcased a working iSIM in a smartphone.

The smartphone has been playing an important role in increasing consumer awareness about the eSIM, while benefitting other consumer categories such as smartwatches, laptops and tablets. Cellular connectivity in smartwatches is growing steadily which is also helping in increasing the penetration of eSIM-supported smartwatches. The adoption of entitlement servers by MNOs worldwide is a testament to the growing number of smartwatches and other companion devices powered by eSIM. Development of newer use cases such as remote work and remote learning will also increase the requirement for cellular connectivity in devices such as CPEs, routers, laptops and tablets. eSIM capability allows users and service providers to activate and manage connectivity quickly, efficiently and seamlessly.”

Smartphones will contribute to the majority of eSIM-based devices over time, but the number of IoT/M2M devices equipped with eSIM will grow faster across several applications and different flavors of cellular technologies from NB-IoT to 4G to 5G. eSIM activation rate in cellular IoT applications will remain high, lowering the usual costs of production and logistics involved in delivering and activating traditional SIM, alongside savings on space and power. 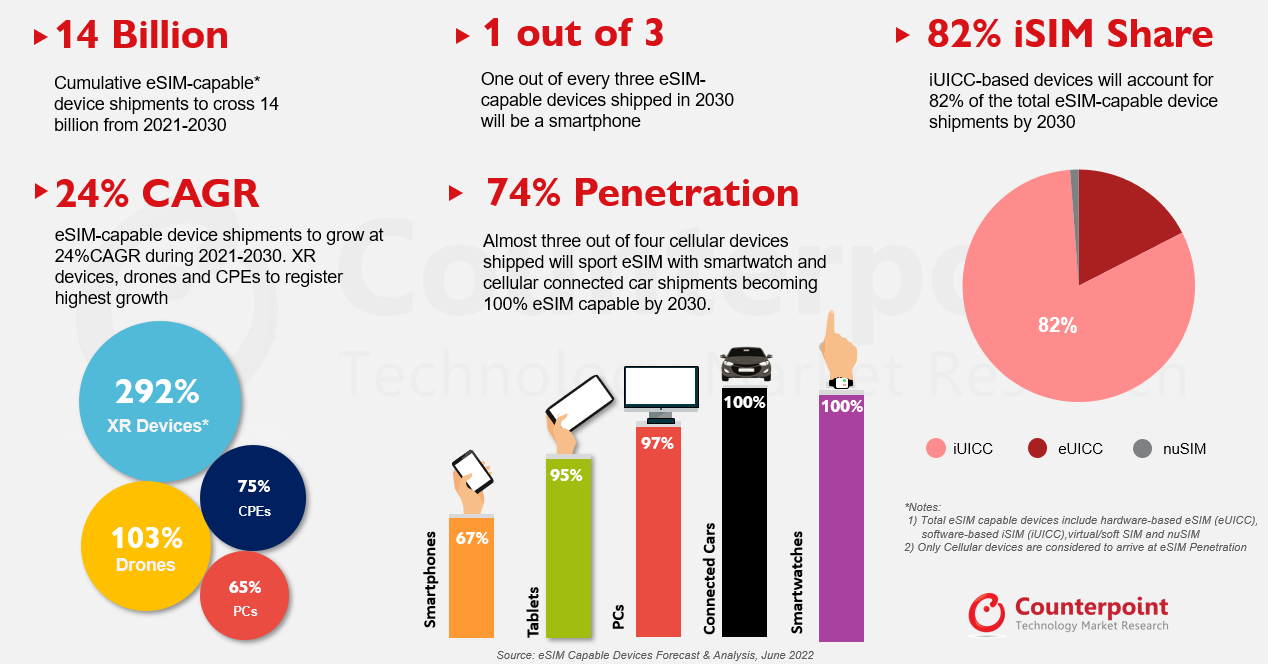 Emerging device categories such as XR, drones, CPEs and PCs will be the fastest-growing categories. The current adoption of cellular XR headsets is very limited due to battery constraints, high bandwidth requirements and poor user experience. However, the onset of 5G and higher bandwidth, low-latency capabilities, device form-factor improvements, battery and computing efficiencies, robust app and content ecosystem evolution, and eSIM as one of the key connectivity management technologies will drive the uptake of 5G XR devices after 2025. The 5G-connected drone is another category that will benefit from eSIM technology and drive adoption across several use cases like last-mile delivery, disaster management, search and rescue, education, construction and agriculture. Regulation of beyond-visual-range drones in regions such as Europe will increase the adoption of eSIMs as well.

Automotive and smart mobility is a huge growth area as well. Connected cars are one of the largest and obvious use cases for eSIMs. Consistent connectivity experience for mobility applications is becoming paramount, particularly for safety use cases such as eCall and the future rise of autonomous driving. Recent collaborations such as G+D and BMW show the adoption of eSIM by leading players with advanced features.