By Sandra Dragosavac On Aug 12, 2021 925
The least stress-free destination for European holidaymakers is London, followed by Moscow, Istanbul, Rome, and New York

Maybe you’re looking to explore, visit new cultures, or even just enjoy a break away from home for the first time in a while but you might also be looking for that perfect city that strikes the balance of calm, serenity and has the ideal recipe for wellness. best city break destination

Radical Storage analysed the most popular city break destinations from Europe, revealing the Greek city of Corfu to be the top destination for a relaxed city break.

The Greek city of Corfu is the most stress-free destination for a getaway, scoring 78.9% in the wellness analysis. With key areas being the low light, noise and air pollution recorded in the city, in addition to easy transit times to and from the island’s airport. 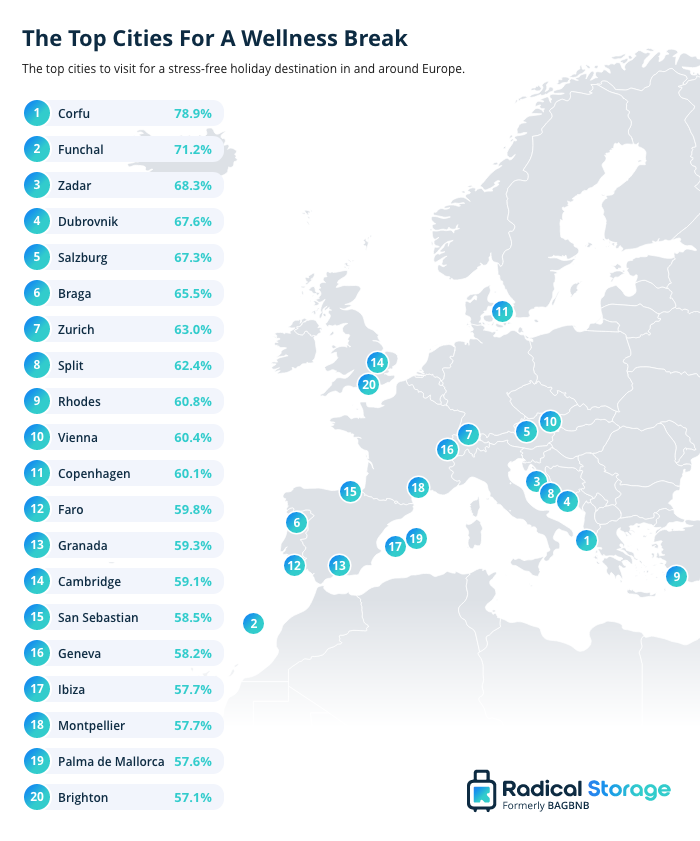 In second place in analysis, is the Portuguese city of Funchal, on the island of Madeira. Low levels of city density, noise and air pollution, as well as competitive costs when it comes to eating out, saw the city rank highly with a score of 71.2%.

Completing the top five cities for wellness breaks are, Zadar, Dubrovnik, and Salzburg.

The two Dalmatian coastal cities of Zadar and Dubrovnik scored most positively on air and noise pollution, with a high density of four-star restaurants within the city’s help to see them score highly with 68.3% and 67.6% respectively.

Rounding off the top five, the Austrian city of Salzburg scored 67.3%, scoring well in regard to light pollution and transit times to and from the airport.

The not so top cities for a wellness break

Saudi Arabia Is The Fastest Growing Tourism Destination In…

First Time Traveling Abroad? Here are Tips For A Successful…

At the other end of our index, London was found to be the worst city for a stress-free break, with high light pollution levels and a lack of 4 star rated restaurants per square mile seeing the scores for England’s capital plummet.

The second worst city for a ‘wellness break’ is  Moscow, scoring just 31.0% in our analysis. The key areas that impacted Moscow’s score were the high levels of light pollution, long transit times between the airport and city, and few 4+ star rated spas, viewpoints and restaurants per square mile.

Rounding off the bottom five cities in our analysis of wellness break destinations are Istanbul, Rome, and New York.

The sheer density of New York, along with the accompanying high noise and light pollution saw the US city rank the fifth least stress-free city in this analysis.

Istanbul and Rome both ranked poorly in our analysis due to their high levels of noise and light pollution, as well as the density of 4+ star rated spas, viewpoints and restaurants per square mile.

Using the latest data available from a range of sources, we collated 11 data points for 96 of the most popular and talked about city and weekend break destinations from Europe to provide an insight into the most stress-free cities.

Based on the results of the data points, each city was given a ranked score out of 96, with 96 points being the best and 1 the worst. Total ‘Wellness % Scores’ shown are a reflection of each cities total score out 1056.

Where larger cities might naturally have more amenities and attractions due to their larger size, we calculated the average per square mile density of 4+ star rated viewpoints, spas and restaurants, to provide a fair comparison between the cities.

Saudi Arabia Is The Fastest Growing Tourism Destination In The G20