Cable operators’ hybrid-fiber coax (HFC) networks will continue to dominate the residential broadband market in the US, resulting in a 65% share in 2027. The operators’ tight grip on the market will be maintained even as rivals expand fiber-optic availability and consumers increasingly adopt fixed wireless access services, according to GlobalData.

The leading data and analytics company’s latest report, ‘United States Fixed Communications Forecast’, reveals that US residential broadband service revenue is expected to grow at a compound annual growth rate (CAGR) of 4.56%, from $84.5 billion in 2022 to nearly $102.6 billion in 2027. 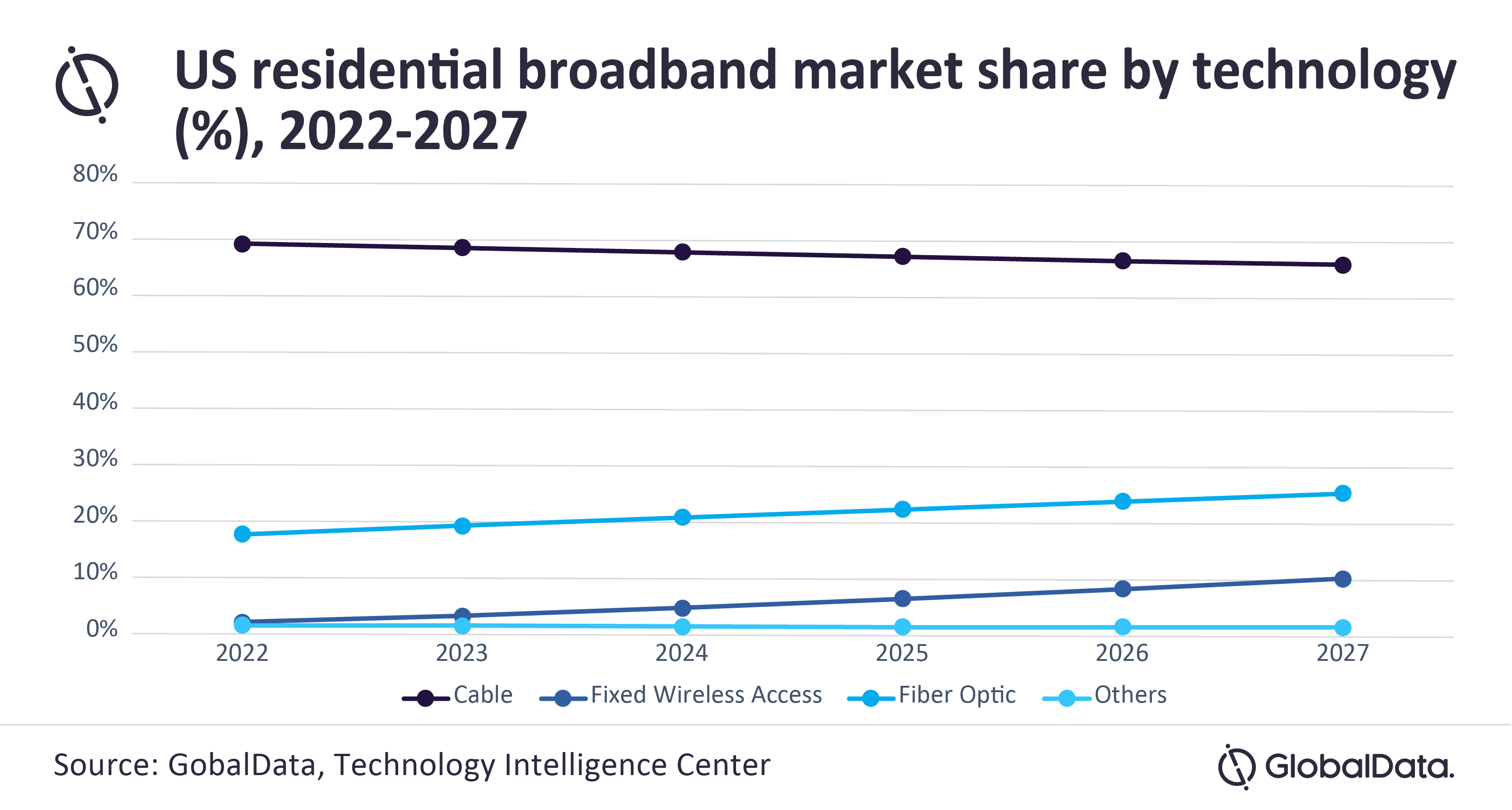 Despite cable operators losing some market share between 2022 and 2027 due largely to competitive challenges from telcos’ fiber overbuilding activities, cable providers will constrain their market share loss not only by improving their HFC networks, but also by edging out their networks into new areas. Furthermore, cable operators are increasingly deploying their own fiber networks.

Cellular LPWAN to Generate Over $2 Billion in Recurring…

Tammy Parker, Principal Analyst at GlobalData, comments: “Fixed wireless access (FWA) networks are fast becoming a 5G success story, particularly in rural areas with limited wireline broadband infrastructure, but also in urban areas where their pricing and service satisfy the needs of customers looking for alternatives to incumbent broadband providers. Yet, GlobalData forecasts that FWA will still capture less than 10% of the residential broadband market by the end of 2027. Similarly, other broadband rivals, such as low-earth orbit satellite networks, will hardly make a dent in the residential market through 2027, capturing less than 1% market share.”

Much of the ongoing growth in broadband will be enabled through government funding, particularly the Broadband Equity, Access, and Deployment (BEAD) Program, which was established by the Infrastructure Investment and Jobs Act (IIJA) of November 2021 and appropriates $42.45 billion for broadband deployment and related efforts.

Parker adds: “The BEAD notice of funding opportunity released by the National Telecommunications and Information Administration (NTIA) in May 2022 promotes government-owned networks and prioritizes fiber over other technological approaches. However, fixed wireless and satellite solutions will most certainly need to be considered as part of the technology mix because it is not feasible to deploy fiber to many of the unserved and underserved areas that are supposed to be prioritized under BEAD.”

Telecom and pay-TV services revenue in Australia to reach $21.9 billion in 2026