While LTE investments dwindle, 5G deployment is about to ramp up—big time. According to Mobile Experts’ latest report, China Mobile is expected to deploy at least 500,000 sites (1.5M RUs or higher) within the next two years. This international burst coupled with a shift in radio configuration for massive MIMO will permanently alter the face of the market.

“We’ve been tracking the macro Base Station market for 12 years, with 10-15 million transceivers shipping each year. Upcoming changes in the 5G and massive MIMO market will rocket the run rate to over 100 million within the next year. The field deployment will begin within a few months, but we’re already seeing its impact in the component world,” commented Principal Analyst Joe Madden.

In the report, Mobile Experts explains the economic, ROI-driven decisions being made in countries like Korea, Japan, Finland, Dubai, and the United States.

China’s motivations works out differently, however. Political considerations affect the outcome as China attempts to move ahead of the rest of the world in telecom technology, as they simultaneously strive to build up their own domestic supply chain. 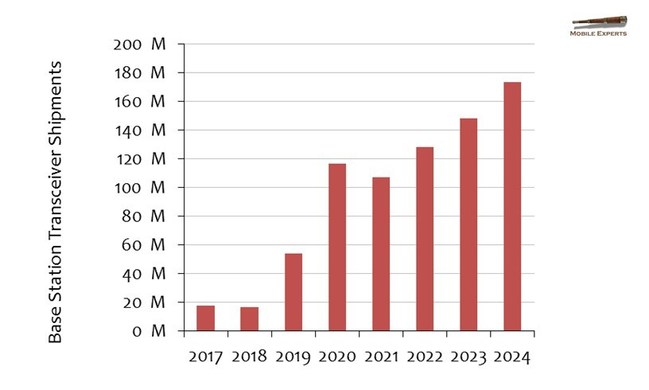 “5G is proven in trials with massive MIMO, real handsets, and both LTE and 5G core networks. The technical risk is now significantly reduced, and everyone’s feeling confident that this works. All operators in key markets need to move to 5G in order to keep up with end-user demand,” commented Principal Analyst Joe Madden. “Most importantly, 5G is expected to bring new capacity to the mobile market with lower cost per GB than ever before. Anybody that misses this transition will never recover.”

The mobile engagement market is expected to reach USD 38.70 billion by 2023