5G Leads in Global Handset Shipments – All Other Technologies in Decline

The global smartphone market declined by 7% YoY, shipping 328 million units in Q1 2022, according to the latest research from Counterpoint’s Market Monitor service. The decline was caused by ongoing component shortages, as well as COVID resurgence at the beginning of the quarter and the Russia-Ukraine war towards the end. The global smartphone market also, as expected, had a seasonal decline of 12% QoQ. 5g handset 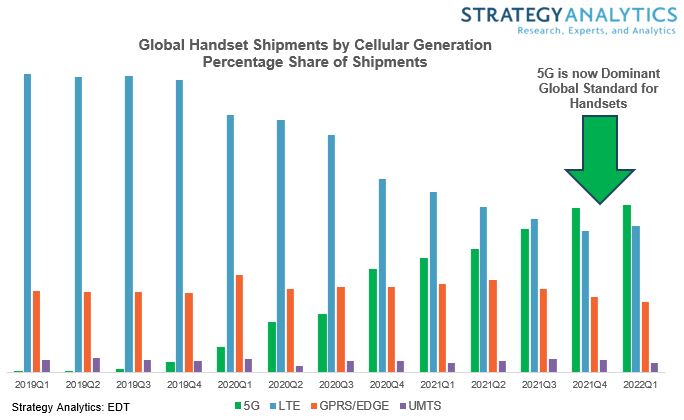 Apple was the 5G smartphone shipments leader, accounting for one in three of all 5G handsets shipped worldwide, while Samsung accounted for one in four.  Between them the two companies shipped over half of all 5G smartphones globally, taking the lion’s share of the most profitable segment of the handset market.

US tech giants such as Google, Meta and Netflix may have to bear some of the cost of Europe’s telecoms network, EU ‘s digital chief Margrethe Vestager said

Cyprus is the first EU country with 100% 5G coverage