According to Counterpoint Research Market Pulse service, the global premium market sell-through declined 7% YoY. The contribution of 5G within the price segment was 5% during the quarter.  Samsung led the 5G segment with 74% of the market share followed by LG (11%) and Vivo (5%).   This was driven by the early adoption of 5G in South Korea, followed by North America and China. The Samsung Galaxy S10 5G was the top-selling model, capturing over one-third of the total sales of all 5G devices.

need an international sim card? get it here.

All major OEMs in the premium segment now have 5G-capable devices, except Apple. Still, Apple alone captured over half of the premium market in Q3 2019. Apple grew 1% YoY increasing its market share from 48% a year back to 52% during the quarter. This was driven by both the initial, strong demand for the iPhone 11, as well as the continued success of the iPhone XR. iPhone XR was the top-selling model globally in the premium segment. 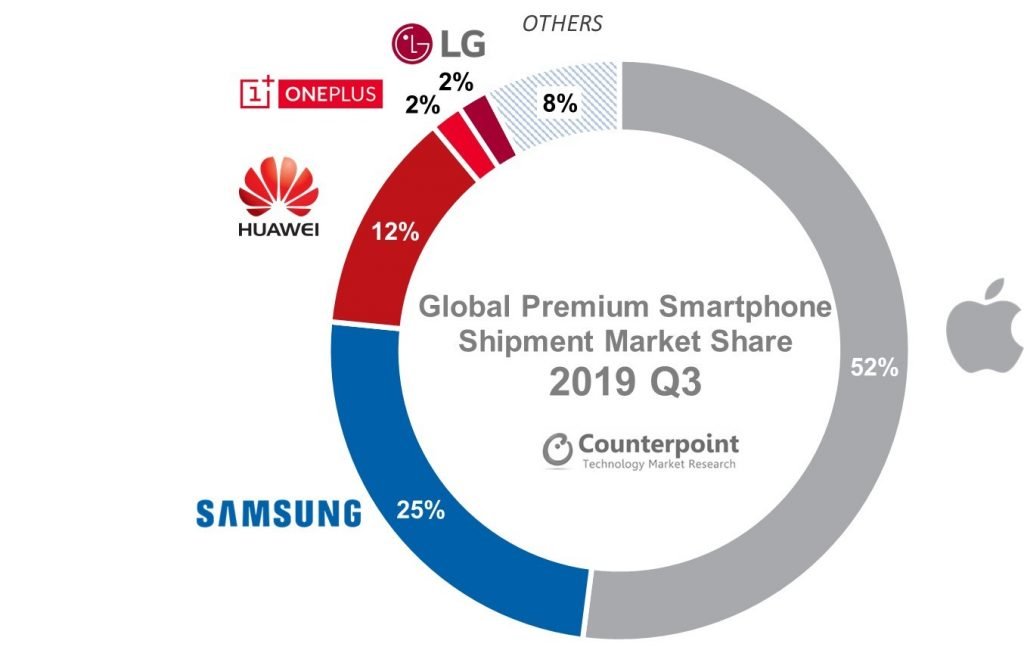 Huawei remained in the top three OEMs in the premium segment driven by the popularity of the P30 series, especially in China. China contributed to over 80% of Huawei’s sell-through in the premium segment as compared to 73% in the year ago quarter. The trend is likely to continue. It will be difficult for the newly launched Mate 30 series to create any progress outside China because it lacks Google Mobile Services (GMS). GMS is an important enabler for Huawei to continue its success outside China.

OnePlus recaptured its position among the top five OEMs in the segment. It also led the India premium segment, which reached a record high shipment level during the quarter. With the launch of OnePlus 7T and 7T Pro, the OEM now covers a wide portfolio across different price bands in the premium segment targeting users at various price points to upgrade.

LG also captured a spot in the top five, driven by the V50 ThinQ 5G. LG grew 20% YoY in the premium segment. This is in contrast with LG’s overall smartphone shipments, which declined over 30% YoY during the quarter. 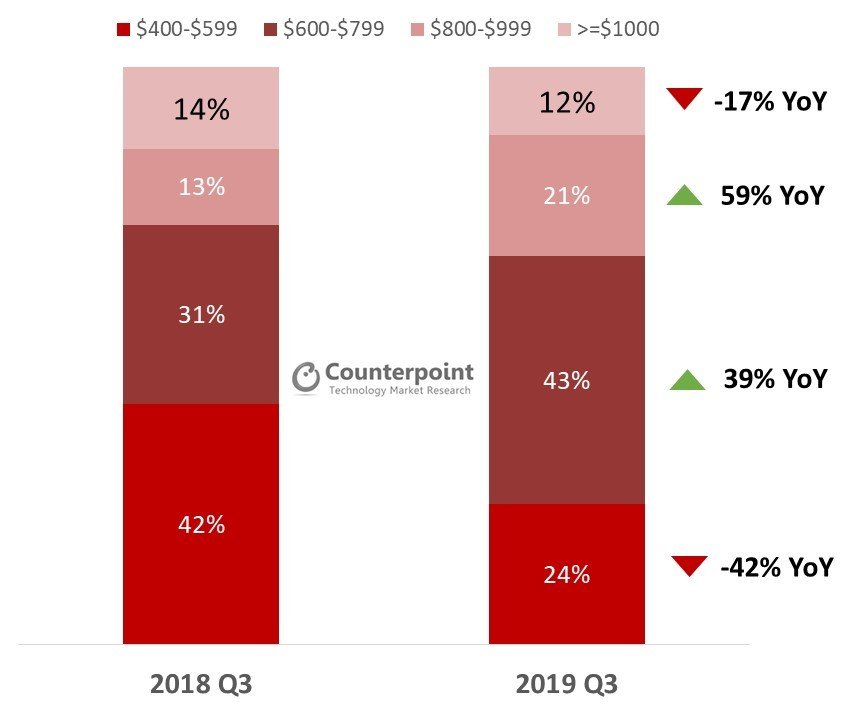 Going forward, the adoption of 5G will play a key role in the growth of the premium segment as well as the overall global smartphone market. Apple will be launching its 5G devices in 2020 driving upgrades among Apple users and potentially pulling in some previous Android users. Currently, all the 5G phones available fall within the premium segment, but this will also change in 2020. Major Chinese OEMs will launch 5G-capable devices in the sub-US$ 400 price band. China will drive the 5G segment followed by other key markets like the US and Korea. The uptake of 5G will also push the overall global smartphone market to grow in 2020.

New York City is no longer one of the world’s top 10 tourist destinations. Check out which are in

Consumers Willing to Spend 20% More on 5G Smartphones. You?