1oT is launching the eSIM for IoT at Mobile World Congress (MWC) in Barcelona on Feb 25-28, 2019. This is the future of SIM technology pushed to the market in collaboration with Giesecke+Devrient (G+D) Mobile Security, the world’s leading eSIM management service provider. Technically known as eUICC, eSIM is an unlocked SIM card that enables the client to manage different carrier services “over-the-air” without the need to physically change the SIM card.

Major automotive companies such as Tesla, Mercedes Benz, and BMW have been driving the eSIM market for several years and have already deployed commercial services based on eSIM technology. 1oT is bringing this revolutionary technology to a wide range of global startups, SMEs, and tomorrow’s enterprises, so that others, besides big automotive conglomerates, can benefit from modern SIM technology as well.

According to Märt Kroodo, the founder and CEO of 1oT: “The first SIM card was produced in 1991. It is mind blowing that with all the digital revolution we have experienced over the last three decades, carriers have been keeping the SIM technology unchanged! The only thing that has been changed is the size of the SIM, not the content itself. Fortunately, using eSIM technology, 1oT will now open up the global connectivity market for IoT”.

READ MORE: Gemalto First In The World To Make 5G SIM Available To Unleash The Potential Of Next Generation Networks

With the 1oT eSIM, there are no carrier lock-ins. eSIM technology provides the freedom to change carrier subscriptions on the go. As Rameez Sultan, 1oT’s Connectivity Technologies Lead explains: “If a client is facing negative price changes, quality issues or just gets better prices elsewhere, they can simply activate the carrier service that best fits their needs. 1oT, as our name suggests, gathers everything together under ONE global end-to-end service by providing the client with one invoice, one connectivity management platform, and one eSIM capable card with multiple pre-negotiated carrier deals for worldwide coverage.” 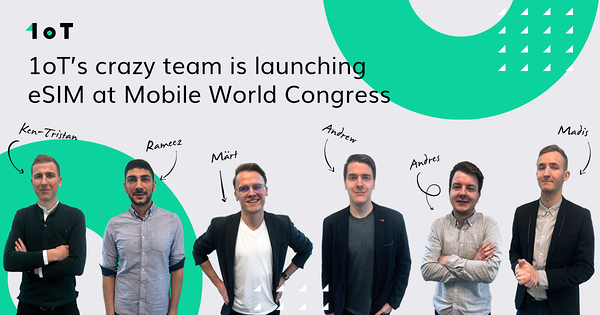 1oT is already providing 5 different pre-negotiated carrier deals on its eSIM and is adding more and more global Tier 1 carriers to the list over the next months. At the Mobile World Congress, 1oT is proud to present its eSIM solution to the wider public on a kick scooter at its stand located at Hall 8.1 Stand 8.1J51.